Only advice is to put your lower movement units at spaces 1-5.

First things first, use Paola to kill the thief heading towards the village.

Now, to get to the castle there are two ways: you can lower the bridge, either with Warren’s key or with a key hidden here (view Hidden treasure section). The problem is that the combat area will be bigger and so weaker units will be more vulnerable, plus the dragon knights will be a greater danger and you’ll end up killing Machis before you even get Julian. the advantage is that it is a much faster route.

Your other choice, and the one I recommend, is to go around all the map, which is much slower, but you get more control of the game by fighting in narrow areas. Plus, the dragon knights at the mountains will not move when you are passing by the western path; they do when you are near the castle, meaning you can kill them very easily with Katua and Paola. The scene would look something like this: 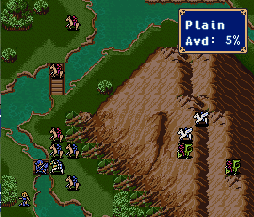 Block the forts as you pass by. Once you are at the north eastern village, you can lure the other dragon knights. You are able to handle two or three at a time, thanks to having Paola and Linda in the party now.

After that, I suggest to use Doga to lure the Social Knights and recruit Machis with ease. As for the boss, just use Linda and her Aura tome. Also, don’t forget to get the Iote’s Shield with Julian (view Hidden treasure section). Don’t forget to sell the silver axe you got in the south western village and buy steel weapons.