One of the striking new features of this game are the Battalions–the groups of soldiers–that accompany units in battle. These Battalions can improve the stats of units and can allow them to trigger Gambits.

Battalions can be hired (with Gold) from the Battalion Guild in the monastery. There are a variety of different Battalions available, each with different stat boosts or available Gambits. The Battalions a unit can equip depends on their Authority skill level. 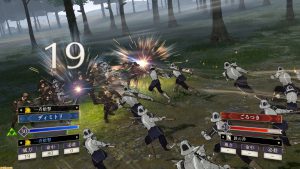 Once a Battalion reaches zero endurance, their supportive effects will disappear and their Gambit cannot be used. Endurance can be replenished from the Knights’ Guild, by paying a small fee.

Last but not least, Battalions can Level Up similar to normal units. When they Level Up, the stat boosts they provide may increase. It seems Battalions can reach up to Level 5 (although maybe higher ranked Battalions have a higher level cap?).

* Name is translated from the Japanese version

These are extremely potent attacks that can be used when a unit has a Battalion equipped. They can offer various effects, such as damaging multiple enemies at once or providing buffs to teammates. Also, they negate counter-attacks. However, Gambits have a limited number of uses per battle. 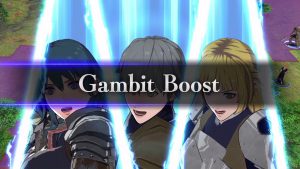 When a unit triggers a Gambit with nearby allies that can target the same enemy, a Gambit Boost may occur in place of a co-ordinated attack. Like the name suggests, this enhances the regular Gambit, relative to the support levels of all the participants. It also has a special cut-in effect at the start.

* Name is translated from the Japanese version