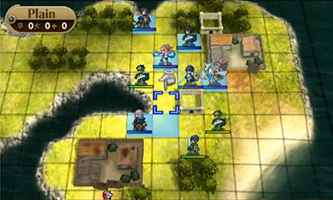 Talys isle never gets old… or does it?

Due to various reasons, a number of chapter maps are based on maps from previous games in the series. 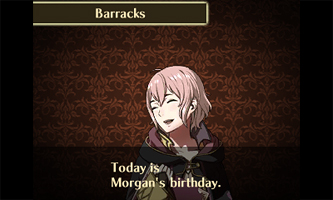 With the exception of Morgan, all of the children are born on the Japanese release date of a Fire Emblem game.

Rather fittingly for the player’s child, Morgan’s birthday is the same day as Children’s Day (May 5th in Japan).

The Knights of Iris book reveals that there is a set of translatable ancient glyphs in the game.

According to the designers, there are carvings on the Falchion that read “sniamer llits erutuf eht tsol si esle lla nehw”, which when reversed produces an English sentence.

Similarly, the Fire Emblem has a number of carvings, which read:

The text is a direct reference to the five holy orbs from Marth’s games, e.g. Lightsphere, which are now known as “White Flame” etc. in the Japanese version.

The ancient Tellius text, which appears in Path of Radiance and Radiant Dawn, can be found surrounding the game’s various magical spells (thanks to Airship Cannon for the findings). 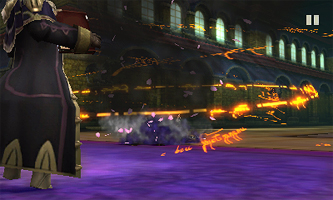 In particular, the text is apparently most clear when casting Valflame (shown above).

For those curious about what the text says: sadly, it appears to be just garble and is the same text that appears alongside Radiant Dawn‘s spell animations (texture A | texture B).

If you’ve played the game, you’ve probably seem them: three mysterious landmasses found to the very north, south and south-west of the world map. 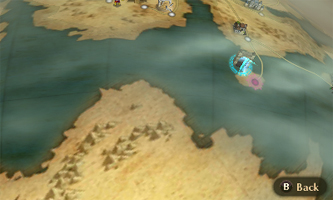 The continent south of Ylisse

Most fans believe these are probably continents from previous games in the series, e.g. Jugdral, Elibe, Magvel and/or Tellius.

However, if you thought of analysing the mysterious continents in detail, to try and play continental match up, then it seems you’re out of luck.