Decades before the start of Path of Radiance, Princess Almedha of Goldoa had a disagreement with her father Dheginsea about Goldoa’s strict military neutrality. As a result of this dispute, Almedha ultimately left Goldoa. 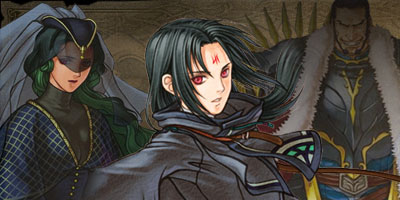 Her journey brought her to Daein, where she met Prince Ashnard, who had great plans for the future of Tellius… Impressed by the black dragon’s strength, Ashnard quickly found a great deal of common ground with the wayward princess, and even a sense of physical attraction, resulting in Almedha’s pregnancy and the birth of their son.

But unions between beorc and laguz were forbidden by the Goddess, or so it was said, and in punishment Almedha lost her ability to transform into a black dragon after the birth of their son. Worse still, their son did not have the ability to transform into a dragon either. In fact, all that distinguished him from an ordinary beorc child was a curious scar on his forehead, the mark of the Branded.

Since Almedha had lost the one thing that had once attracted Ashnard to her, he abandoned her. Since their son never had the ability to transform into a dragon, Ashnard kept him just long enough to lure another dragon, Almedha’s brother Rajaion, to his side. Once Rajaion was captured and drugged into obedience, Ashnard had no further use for the Branded infant, and so he abandoned him for the dead.

But the infant prince did not die. A woman reluctantly took in the homeless, parentless infant, gave him the name Soren, and kept him alive for three or four years. But that was all that could be said for the woman’s deeds, for it was painfully obvious to Soren that she did not love him. His earliest memories were of her saying “Why me? The world isn’t fair!” and “Stay away from me, child!”

When the boy Soren was four years old, an old sage from Gallia came to the woman’s house and offered a large sum of gold in exchange for the boy. Seeing the scar on the boy’s forehead, and believing the boy to have made a pact with a Spirit, the old sage drilled him hard in the magical arts, and Soren quickly became very powerful for his age. The sage knew that he was dying, and all that he wanted was to pass on his magical skill to an apprentice.

The sage died two years later, when Soren was six years old. It is unknown how long Soren stayed in the sage’s hovel, eating the last of the provisions, but as soon as the food was gone, he left to seek other sources of food.

At every village Soren passed, the beorc villagers shunned him. They could see the mark on his forehead; they knew that he was Branded, and they scorned him for it. Nobody offered him food or shelter. Furthermore, Soren himself could not speak. The old sage had taught him to read and write, but neither he nor his foster mother had ever said anything that required a verbal response, so Soren had never learned to speak.

Then, exhausted and famished, he arrived at the outskirts of a certain village, where a blue-haired, blue-eyed boy found him collapsed on the ground, skinny as a twig, wearing rags and covered in dirt, looking as if he were on the edge of death.

The blue-haired boy offered his lunch to the starving child, but Soren simply shook his head, afraid that the boy simply intended to taunt him with his food. Then the boy put down the food and said that he would come back the next day with more.

The next day, Soren came to the same place where he had met the blue-haired boy, but the boy never came back. What was more, the entire village was in ruins. Dead Beorc littered the ground, and villagers were fleeing in panic. Soren searched the carnage but could not find the boy’s body among the dead. Believing that the boy must therefore be alive, Soren stole as much food and gold as he could carry and fled north to Crimea.

On his way to Crimea, Soren encountered several groups of beast-tribe Laguz, but they sensed that he was Branded and ignored him. The way in which they looked at him and then turned away as if they had seen nothing hurt Soren more deeply than the scorn of the Beorc, and he hated them for it.

When he reached Crimea, Soren quickly came across a church, where he found sanctuary and learned speech and etiquette. The Crimeans had noticed the mark on Soren’s forehead, but as with the old sage, they had mistaken him for a Spirit Charmer.

Years passed, and Soren set out again on his quest to find the boy who had saved his life. At last, among a mercenary company called the Greil Mercenaries, Soren found him: Ike, son of Greil. Ike had no memory of that day in Gallia, but Soren did not care; he only wished to see that boy again, the only one who had ever been kind to him.