A special attack, which features in many of the games, usually reserved for the Pegasus sisters or trio. In this game, only Vanessa, Tana and Syrene can perform it. 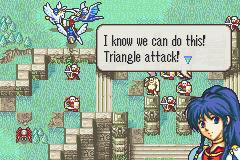 The Silver Card is hidden in the desert sand in Chapter 15. With the Silver Card in their inventory, a character can purchase items for half price. To find its location and more information, please check this page.

The Member Card allows the user access to Secret Shops (their locations can be found here), which sell more interesting gear than most normal shops.

Rennac, an enemy Rogue, has the Member Card in Chapter 14. He can be recruited with L’Arachel, Eirika or Ephraim (if you use the Lords, you need to pay him 9,980G). If you can’t recruit him for some reason, you can still obtain the card by killing him while it’s still flashing green in his inventory (indicating he will drop it) or stealing it from him.

If you missed the Member Card or lost it, there is another chance to obtain it. The only chest in Floor 10 of the Lagdou Ruins gives a Member Card with a success rate of 10%. It’s a pretty low chance for such effort, but at least the chance is there…

Note: This glitch doesn’t seem to occur on the Japanese version.

Unlike most glitches in Fire Emblem, this glitch is pretty harmful. If a Wyvern Knight activates Pierce on an enemy that cannot counter-attack (this can also be achieved by equipping a Brave Lance), fails to kill the enemy on the first strike and attacks a second time, the game may hang up. It seems this glitch is caused by dealing damage to an enemy before their HP bar has finished decreasing. The minimum amount of damage dealt by the first strike that is required to freeze the game is as follows:

The best way to avoid this glitch is to switch off battle animations when using a Wyvern Knight. 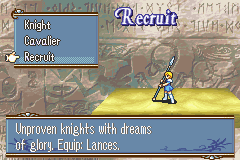 Amelia about to promote into a Recruit (2).

When both Eirika and Ephraim’s routes have been completed, the Trainee characters (Ross, Amelia and Ewan) can promote into another Trainee class and then into a “Super Trainee”. Super Trainees look identical to normal Trainees, but have better stats and new abilities. The “Super” Journeyman and “Super” Recruit gain a +15 Critical bonus and the “Super” Pupil gains the ability to use Light and Dark magic. More detailed information can be found at this page.

Note: The term “Super Trainee” was coined by fans and isn’t a real class name.

This can only be accessed if you have at least one Epilogue (cleared) file. To access it, go to “Extras”, “Map” and select an Epilogue file. You will then be returned to the world map where you can continue your game file. You can only enter skirmishes, the Tower and Ruins, but you can do mostly everything else that you could do in the main game, eg. build supports, level up and buy items.

Once you have completed the game and have access to the Creature Campaign, completing certain floors of the Tower of Valni and Lagdou Ruins will allow you to use a handful of boss and NPC characters from the main game. Please check this page for more information.

When you reach the Creature Campaign, the Secret Shops in Grado, Jehanna and Rausten will have a variety of different statboosters to purchase. You’ll need the Member Card to access the Secret Shops still. Swiftsoles are the only statbooster that cannot be bought, but there is actually a pretty easy way to get a whole load of them, as shown below…

To waste an RN, pick a character with 7 movement (you can do it with any odd number of movement, but I want to keep things simple). Make sure there’s plenty of space and the character is not obstructed by too much terrain. Click on the character and move the cursor to get the movement arrow shown below: 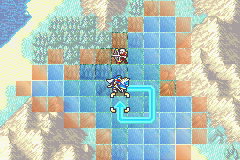 Now move the cursor one tile to the right and see what happens. You will either get a smaller L shape arrow or a 180 degrees rotated L shape. Which arrow you get depends on the next RN that the game has stored. Doing this manouevere uses up that RN, which is often referred to as wasting RNs.

To get your hands on a Swiftsole:

Note: This only works in the Creature Campaign, Normal and Easy Mode. If you’re playing in Hard Mode, instead of 13 RNs waste 3 RNs, and instead of retreating from the Ruins 3 times retreat 6 times. Credits to Iggy Koopa for this note.

(Often referred to as the Phantom glitch or other names.) 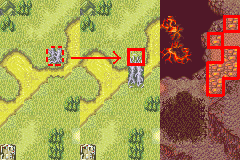 Examples of where to make the enemy attack from.

As the name suggests, this is similar to the Mine Trick that featured in Blazing Sword, which allowed you to control enemy units. Unlike that game, there is no Mine item (without using cheat codes anyway), but a similar effect can be achieved with flame tiles and broken snags. To use this trick, you need to have an enemy attack while standing on a flame tile or broken snag (where the snag used to be). Once the enemy finishes attacking, and before another enemy moves, reset the game. When you resume the game, you should be able to control the enemies. This might take a few tries to work but, once you get the hang of it, you can pull off it with near 100% success.

Note: It has been reported that this also works on normal tiles, but the chances of success are very very slim.

(See also: Youtube video – Using the Mine Trick to repair items, by ThunderManEX)

This requires usage of the Mine Trick v2.

By using the Mine Trick, there are two ways to obtain monster weapons (since enemies can’t trade with player characters). The easiest method is to move the enemy monster next to the supply character (Eirika or Ephraim) and make them deposit their items. The other method is to find a monster that will drop a weapon or items, use the Mine Trick to control them and make them switch items so their monster weapon drops instead.

So what’s the point of getting these weapons?

Firstly, the monster Dark magic (such as Shadowshot) can be used with any character. Note that only Stone gives Weapon EXP (as long as it has more than 1 use), so using other monster Dark magic won’t increase a character’s Dark magic rank. Also, offensive magic units (such as Mages) can wield Dark Magic fine, but giving other units Dark magic may screw up their battle animations. Secondly, monster weapons with no rank can be given to Myrrh.

This requires usage of the Mine Trick v2 (twice). 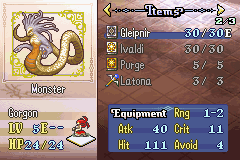 Yes, Gorgons can even equip Gleipnir and Naglfar.

First position your supply character (either Eirika or Ephraim) in front of a Gorgon Egg. Activate the Mine Trick and make the Gorgon Egg retrieve four items from your supply. Make sure that the first item being held by the Gorgon Egg is useless, because it will disappear later. Once the Gorgon Egg hatches, you’ll notice that the four items will have full uses again, but you’ll need to get them back first! Activate the Mine Trick again and make the hatched Gorgon deposit the items back into the storage. This works for all weapons, staves and items (even Myrrh’s Dragonstone).

Note: Be careful when trying to repair the Dragonstone or any Dark magic tomes, since Gorgons can use them.