All stat changes as a result of changing classes are simply the difference between the base stats of the new class and the initial class. (The exact changes may differ from what is listed on this site due to the class’ maximum stats.)

When a character changes from a promoted to a non-promoted class, they may receive a significant decrease to their stats (especially if the character has many capped stats). However don’t worry, because the game keeps track of all stat gains, so their long-term growth is unaffected.

If a character cannot use a weapon type in their new class, but could in their original class, that weapon type does not carry over (but gained Weapon Exp is remembered).

How to Change Class

There are two methods of changing classes in Awakening–Promotion and Reclassing. Both require the character to be Level 10 or higher and the use of a special item.

After a character changes class, their displayed Level will be reset to 1 and their internal Level adjusted accordingly. Furthermore, all of their learned Skills will be retained. By changing class multiple times, characters can gain higher stats and have more Skills at their disposal.

The Avatar is a special case, as he/she can use a Second Seal to reclass to every class (gender permitting), except special classes like Lord, Dancer, Villager, Taguel, Manakete, Lodestar or Conqueror. 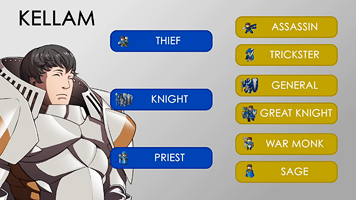 In Kellam’s case, he starts off as a Knight, so he can promote to a General or Great Knight by using a Master Seal, when he’s Level 10 or higher.

When he’s a Level 10+ Knight or a Level 1+ General or Great Knight, he can use a Second Seal to reclass to a Thief or Priest or even a Knight again (and therefore access their corresponding promoted classes by using a Master Seal at the appropriate Level).

Finally, when he reaches Level 10 or higher in any promoted class, he can use the Second Seal to reclass to any of the classes available to him.