Hot off the heels of the first ever English footage of Fire Emblem Fates, our hosts at Nintendo Treehouse showed us an in-depth look at an early English build of the game, including an almost full-length chapter. 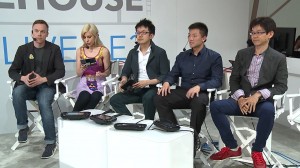 Our hosts are joined by IS’s Yamagami and Yokota.

From the onset, we’re explicitly told that the game has two versions, although it’s not clear how exactly they work–whether they’ll be sold as two packaged versions or something else.

This information aligns with what we know from Nintendo’s (still rather vague) official statements about the game having two versions.

The Story so Far 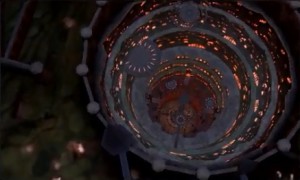 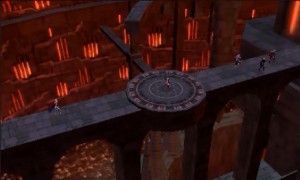 We begin in a chapter during the prologue of the game–more precisely, Chapter 2: Gift of Ganglari, which takes place in Nohr’s “fortress”, Castle Krakenburg, built deep, deep within a crater.

Apparently, the Avatar (currently named “Corrin”) has lived imprisoned in the fortress ever since his capture and it’s only recently that his father, King Garon, has allowed him any sort of real freedom.

However, to earn this freedom, the Avatar must show his worth in battle. Prior to this chapter, the Avatar bested his elder brother Xander (Marx) in a mock battle enacted to test his skills.

With the test complete, it seems he and his family–including elder sister Camilla, younger brother Leo (Leon) and younger sister Elise–are headed back to report to their father. 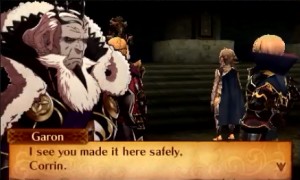 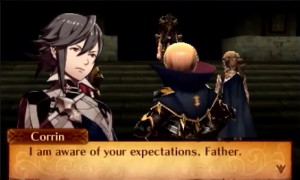 Garon is pleased with the Avatar’s prowess, acknowledging him as a warrior. That said, Camilla is worried whether the Avatar can survive outside of the fortress and its magical barrier, which have kept him safe so long.

Her father rebukes, reminding everyone that Nohr is at war with the “eastern kingdom” of Hoshido (which tells us the two nations’ locations relative to one another), and that the Avatar’s strength is needed.

But as a descendant of the First Dragons (Divine Ancestral Dragons), he still has a long ways to go. Above all, he still needs to learn to wield the draconic power that his siblings possess: Dragon Vein.

Satisfied with the Avatar’s progress, Garon grants him the Ganglari, a curved black blade seen in recent footage. Perhaps this is the new name of the Yatogami or is it an altogether different sword?

Curiously, Garon states the sword is “infused with magic from another world”, so outrealm shenanigans are probably fair game. Could this other world be a parallel world where players made different choices?

Anyway, to see if the Avatar can handle the sword’s powers, Garon orders him to battle a group of recent Hoshidan captives. This upcoming battle is touted as his first real battle. 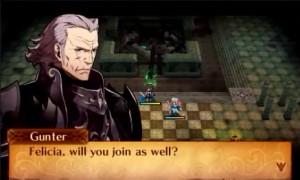 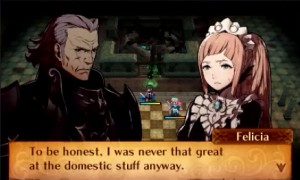 As the mission begins, we have Gunter and Felicia join the player’s team. On the enemy side, we have Rinkah (Rinka), daughter of the Flame Tribe’s chieftain, and Kaze (Suzukaze) a Hoshidan ninja. 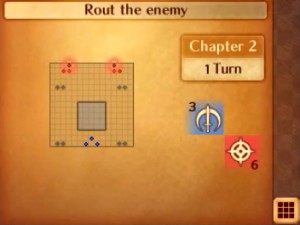 Looking at the bottom screen, we see that the player’s forces have their own symbol, which isn’t Nohr’s crest, while the enemies have Hoshido’s crest (no surprise).

Interestingly, the first action we see is the Avatar using “Dragon Vein” to clear debris to reveal healing spaces. Obviously, healing is good for you, but enemies can take advantage of it too.

The rest of the battle is fairly by the numbers, especially since it’s so early on.

During this time, however, a number of localised terms can be observed.

Additionally, near the end of the mission, Kaze uses a skill called Miraculous Save to save his adjacent ally from certain death. 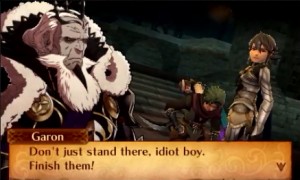 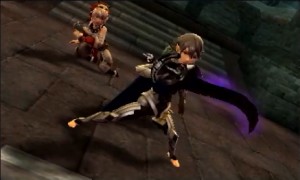 When the mission is over, Garon orders the Avatar to finish off the defeated Rinkah and Kaze. At this point, the Avatar openly opposes his father, even blocking his father’s magic with the Ganglari–a scene we saw in the June trailer.

By the way, Garon is shown wielding an axe in the TV commercial. Since he can wield both axes and magic, his mostly likely class is Revenant Knight, like his eldest daughter, Camilla. (Like how Mikoto is a War Priestess.)

This act of defiance angers Garon, who wouldn’t hesitate to kill any of the siblings, we’re told. He orders Xander to kill the prisoners, even the Avatar if he resists. The two siblings clash blades, although Xander has the upper hand.

In another familiar scene, Leo intervenes by blasting Rinkah and Kaze with magic. Although later, we discover he has simply teleported the pair to safety, which isn’t a surprise since both characters appear later on. 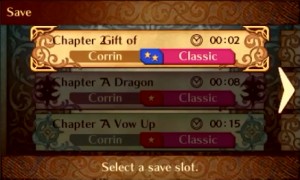 With the chapter over, we briefly catch a glimpse of the save screen, which is interesting because it shows Chapter 7 of both the Hoshido and Nohr route (as indicated by the different chapter names and symbols).

Of course, this is likely a debug cartridge that isn’t 100% reflective of the final product, but it’s nice seeing both campaigns on one cartridge.

As an added note, there appear to be at least 6 save files, which is consistent with each campaign having 3 save files each. 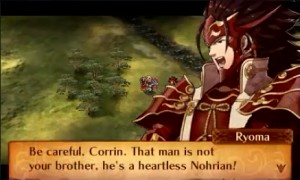 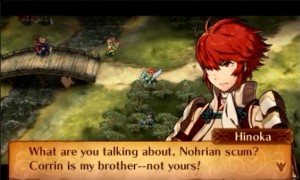 Afterwards, our hosts skip straight to the highly anticipated decision scene, which occurs a couple of chapters later–the moment where the Avatar chooses whether to side with Hoshido or Nohr.

Here, we see the Avatar’s Nohrian and Hoshidan siblings–including elder brother Ryoma (Ryouma) and elder sister Hinoka–playing emotional tug-of-war with the Avatar in the middle. 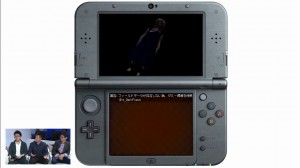 Unfortunately, because of technical hiccups or otherwise (it is an early build after all), we don’t get to see how the entire scene plays out. Which is probably for the best really, so fans can experience it themselves.

Moving on, we’re shown one of Fire Emblem Fate’s biggest new features: the player’s base of operations “My Castle”. 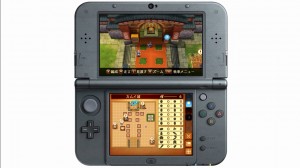 The Japanese text won’t be in the English version, of course.

Amusingly, this entire section is in Japanese, so you can tell the localisation is still in its early stages.

While My Castle is very cool, there isn’t really much new to learn, since it’s been covered in great detail in Japanese media.

That said, in the example, the player has 6 Dragon Vein points, which seems like a considerable amount (or not, since there must have been around 6 chapters prior to receiving My Castle).

Right now, only four buildings can be placed: a Hoshidan Armoury, Hoshidan Vendor, Lottery Shop and Food Court. So the bare essentials (well, maybe not the Lottery Shop…).

Speaking of the Lottery Shop, you can use it once per afternoon to obtain a random item, mineral or foodstuff. In the example, the player receives 1 Coral (mineral). 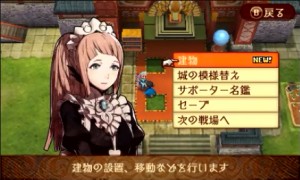 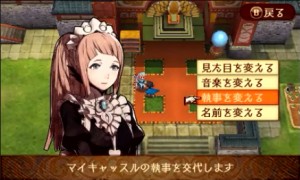 During this time, we’re told that the castle helper–who you go to to create buildings etc.–depends on the Avatar’s gender. If the Avatar is male, it’s Felicia; otherwise it’s likely Joker (who isn’t named).

When speaking to your helper, the following options are available: Buildings, Castle settings, Supporter list, Save and Next battlefield.

Within “Castle settings”, you can adjust its: Appearance (castle’s exterior and terrain), Music, Helper and Name. So fans who don’t want Felicia or Joker managing their affairs can relax!

Furthermore, creating buildings is beneficial in more ways than one–having them can add stats to units or reduce damage. Although it’s not clear whether the actual buildings do this or their items/temporary boosts. 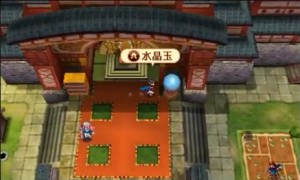 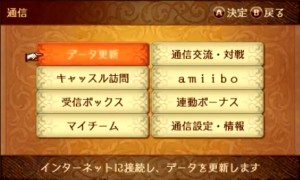 To finish off, we get to witness an exciting StreetPass Battle that takes place in the opposing player’s My Castle.

Before entering the battle, you can adjust your Communication settings by interacting with the Crystal Orb at the back of the castle.

According to Nintendo’s fact sheet, Fates is 1-player, so “Communication exchange/battle” is a bit of a mystery. “Link bonus” too–is this possibly related to connectivity with Awakening? 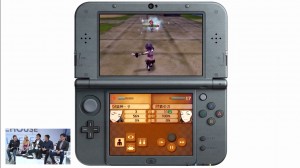 Orochi is on the player’s side, by the way…

Amusingly, the enemy forces are considerably stronger and, initially, the person playing sends many of their units to meet certain doom.

Fortunately, towards the end, the player starts playing a bit more carefully, using Attack Stance to turn the tables slightly. Although it’s hard to say if they would win the battle…

Of particular note, Orochi’s magic spell is the “Rat God – First Branch”, which fits well with how the spell animation looks, what with her summoning an ethereal rat to attack.

Lastly, we’re promised further Treehouse coverage of Fates further down the line. Here’s hoping we get to see parts we didn’t see today!