This page documents various special events or methods in which exclusive content could be downloaded to Fire Emblem games.

Although, in many cases, conventional download of data doesn’t actually occur. Typically, the items, chapters and songs already exist in the games–the download only make them available for normal players to use (the items and songs can easily be unlocked using codes or via hacking).

50 winners could obtain the “Grizel Execution Court” map, which was based on a location in the manga (where Al and Gant went to rescue Tiena).

10 winners could obtain the “V-type” and “J-type” maps, whose shapes were based on the letters V and J.

Additionally, the Japanese official site awarded the “Defeat Bandits” map to those who obtained the highest ranks in their ranking contest.

These extra Trial maps do not exist in standard cartridges, making them something of a rarity.

In Japan, Monthly Nintendo placed GameCube demo machines in certain department stores; these machines allowed players to connect with their GameBoy Advance (plus a copy of Blazing Sword) to download special items and songs.

When the download finished, a new option called “Transfer Data” appeared below “Extras” in the start menu. By selecting this option, the player could choose a save file to transfer the items to. The items could only be transferred to a Chapter 12+ save, and could only be added once per save file.

Additionally VJump held a competition, where a number of winners could receive a special Blazing Sword cartridge with a Dragon Axe, Silver Card, Vulnerary (60 uses) and Song 100: Palace of Silesia already downloaded.

In North America, early copies of Mario Kart: Double Dash!! for the GameCube came bundled with a bonus GameCube disk. As well showcasing various demo videos, the disk included a programme to download special items and songs to Blazing Sword.

After selecting the programme, players could connect their GameBoy Advance (with a copy of Blazing Sword) using a GC-GBA cable to the GameCube and begin the download process. 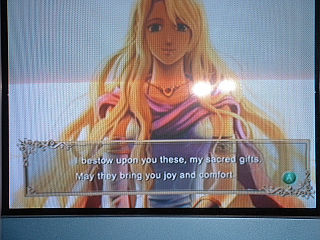 The transferring of items behaves the same way as in the Japanese events.

The songs available were: 99: Legend of the Dragon God and 100: Royal Palace of Silezha.

Similar to the Blazing Sword downloads, there was a promotional event at Jump Festa (Japan-only) during late 2004 where users could download specific items onto their game.

Unlike with Blazing Sword, there was no corresponding method to obtain these items in the English versions.

After completing Path of Radiance, players have the option of connecting their game with a copy of Sword of Seals, Blazing Sword or The Sacred Stones using a GC-GBA cable.

By connecting via the Nintendo Wi-Fi Connection, players can access a special shop in the Extras menu where they can purchase rare items using the in-game currency. The selection of items changes daily, depending on the Wi-Fi server’s timetable.

In Shadow Dragon, the Online shop was the only way to obtain Brave weapons and the Elysian Whip–the latter required to obtain the Falcoknight class.

After set dates determined by Nintendo, a total of 6 exclusive chapters and items can be downloaded by connecting via the Nintendo Wi-Fi Connection and using the Download function in the game’s Extras menu. 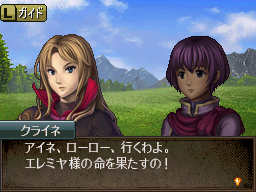 Kleine and Katarina in a bonus chapter

The bonus chapters (“Wind and Thunder”, “Assassins” and “By the Sword”) are separate from the main game, taking place chronologically before the beginning of the game. The bonus items (Growth Drop, Bond Drop and Rainbow Potion) can be attributed once per save file.

Via SpotPass, players can obtain, throughout the course of several weeks, a total of 120 legacy characters, 12 rare items and unlock 6 exclusive sidequests.

Awakening was one of Nintendo’s first forays into paid downloadable content.

New DLC maps were added, generally, every week following the game’s release; these maps include new missions separate from the main game. Items and experience gained from playing DLC maps carries over to the main game. After completing a DLC map, players are usually rewarded with a legacy character designed by a guest artist and sometimes an exclusive class or special Skill.

It seems Nintendo considered Awakening‘s DLC a success, as a second series of DLC was later produced. In North America and Europe, there is no distinction between series 1 and 2 DLC maps.