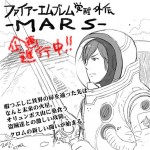 Dubbed “Fire Emblem Awakening Gaiden: MARS” (“gaiden” is Japanese for “sidestory”), the story takes place on the planet Mars in the distant future. For reference, Intelligent Systems once had plans to have a Fire Emblem game on Mars.

According to the story blurb, Chrom travels to Mars by means of an Outrealm Gate; his adventure begins with a campaign to rout the bandits of Olympus Mons.

Due to the involvement of an Outrealm Gate and since we’ve already got Fire Emblem if on the 3DS and Shin Megami Tensei x Fire Emblem on the Wii U, perhaps this sidestory is not a fully fledged title and DLC for Awakening or if. Or maybe it’s not even a game…