The Making of Fire Emblem 64

At long last, thanks to the release of the Making of Fire Emblem, we finally have answers to one of the longest-running mysteries of the Fire Emblem series: Fire Emblem 64.

(A very special thanks to Microwaveit for scouring through the thick book for details and Kirokan for providing images.) 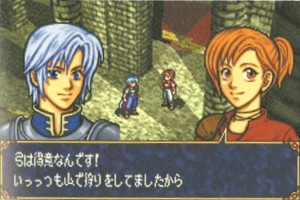 Maiden of Darkness for the GBA

This enigmatic title was suddenly announced during the heydays of the Nintendo 64, but then cancelled almost as quickly as it was announced, with little to no information about the game.

To begin with, as many fans suspected, the foundations of Fire Emblem 64 were used to develop the next title, Binding Blade for the GameBoy Advance.

In fact, Fire Emblem 64 was titled “Maiden of Darkness”, which was also the working title of Binding Blade when it was first unveiled.

But despite all of this, not much was carried over between Fire Emblem 64 and Binding Blade according to an interview with the developers.

While in the middle of production for the N64 version of Maiden of Darkness, due to various structural changes, game planning basically had to start over from the beginning.

While the hero, Roy, remained the same, almost everything else about the game changed, including story and (almost) all other characters.

Also, since the target audience for the game became older, they had to recreate their protagonist to appeal to both kids and adults.

Karel was apparently the only character from Maiden of Darkness to get carried over into Blinding Blade.

A character named Idoun also existed in both games, but only the name is consistent — the appearance, personality, and role in-game are all different.

— Microwaveit’s summary of the interview

Additionally, the book contained some concept artwork from the game as well as a single screenshot of Maiden of Darkness shown during Space World 2000 (which some of you may have seen before; at the very top of this page). 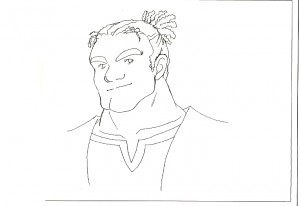 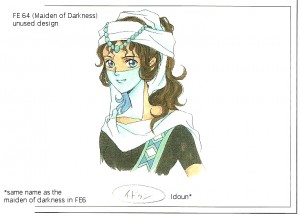 Above is an unnamed male and Maiden of Darkness’s Idoun. Indeed, this version of Idoun looks very different to the one we see in Binding Blade. 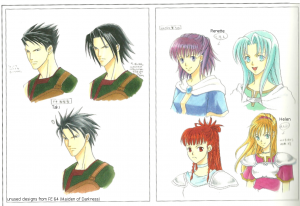 In the left-hand side are different designs for a male called Taki. The right-hand side features four females–Lynette in the top-left corner and Helen in the bottom-right corner.

Eliwood, Raigh and Bors are names of characters from Binding Blade, although it’s unclear if they’re the same characters.

Meanwhile, Ephraim shares his name with one of the Lords of The Sacred Stones, while Owain was later used as Eudes’s English name in Awakening. As such, it’s likely they’re different characters, but their names were simply reused.

On a related note, one of the earliest concept artworks for Roy had his name labelled “Ike”, the same name as the hero of Path of Radiance.

Funnily enough, Ike himself was originally known as “Paris”, a name later used for his descendant in Awakening (Priam in the English version). Clearly the developers love to recycle discarded names!