An unexpected tweet by NintendoOfAmerica minutes ago shared an upcoming surprise for March: 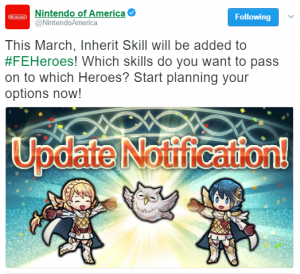 We can look forward to a new feature called Inherit Skill, which implies that units can pass skills down to other units. With no information on how it will work in the game thus far, it will be very interesting to see how the game changes up!

That said, we do have some clues from the v1.01 text dump provided by SciresM. Namely there will be certain restrictions; some skills cannot be inherited due to a clashing weapon type, clashing movement type or simply because they’re exclusive skills.

Additionally, the official FE_Heroes_JP twitter account tweeted the same message, but with an extra tidbit: The hero who’s passing down the skill will be sacrificed (rather, they will return to the world whence they came).