Alm finally got his day, as Alm: Saint-King, the next Legendary Hero, is now summonable in the first Gaiden-themed Legendary Hero Banner!

Alm, an Earth-blessed Legendary Hero that provides the same bonus as Legendary Roy before him, comes in as a Colorless Bow Infantry unit, and brings with him, a handful of new and useful skills. Aside from his B and C being the already in the game Null Follow-up 3 and Odd Attack Wave 3, he brings the new A skill Darting Blow 4 (granting +9 Spd on initiation), the new Special Lunar Flash [2] (Treats foe/s Def/Res as if reduced by 20% during combat. Boosts damage by 20% of unit’s Spd) and his personal bow, Luna Arc (14 Mt | 2 Rng | Eff. vs Fliers | Grants Spd +3 | If unit initiatse combat, deals damage = 25% of foe’s Def. [Ignores reductions to Def crom special skills like Lunar Flash.]) 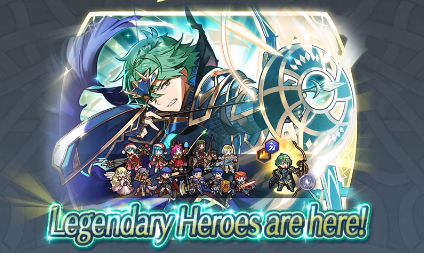 Alm is pretty much joining with a bow that rocks permanent half-Luna, and a perf that implies that he’ll be one speedy boy. If you want to boost his speed more, he comes with the Pair-Up ability, making him number two after Legendary Roy.

Of course, Legendary Banners aren’t just known for their Legendary Hero; they also feature an 8% summoning rate on a select batch of 12. This Legendary Hero summoning event runs from April 27 until May 7, and brings:

Considering the popularity of many of these Heroes, this is looking to be a pretty exciting banner to summon from. Should you opt to drop some orbs, then I wish you good luck, Summoners!