As we know from the Calendar, a new Legendary Hero is set to drop in a few days. The trailer for it just came, and it’s bringing some love for Blazing Sword, literally, in Eliwood: Blazing Knight,

Eliwood: Blazing Knight, is a Wind-affinity Duel Blessed Legendary Hero, and is a mounted red sword cavalry. He comes with the Pair Up feature, as expected, and also a unique C skill, Visions of Arcadia, which supports non-Human (non-Beorc?) characters in a pretty complex way. Additionally, he brings a new dual-Rally skill, in Rally Spd/Res+. 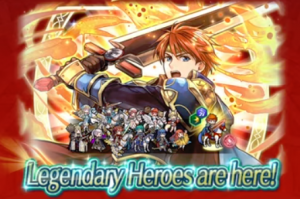 On June 28, until July 5, Eliwood: Blazing Knight is available for summon, and of course, he’ll bring his other Heroes, available at 8% just like other traditional Legendary Hero banners. The other available heroes will be: