The top button leads to the official download link, while the bottom button is a temporary mirror. At the time of writing, the official link doesn’t seem to work, while the mirror is excruciatingly slow. 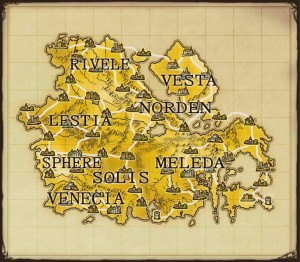 An island situated to the north-east of the Continent of Celeron. (Its size is comparable to Japan.) In ancient times, it was known as “Magul Island”, but during the 3rd Dynasty of Celeron, it was renamed to “Vestaria”. Originally, 6 members of the Udagal (a tribe that evolved differently to humans) saved this island of darkness from the clutches of the Dark Lord. Afterwards, they founded a religious state and 7 nations. 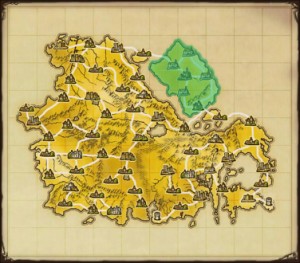 A city-state located at the island’s north-east. Established around 600 years ago. The country was created after the Udagal Archbishop (Vesta) built the Shrine of Rahna in order to seal the Dark Lord’s power. Before long, new shrines were built in the nearby streets and the nation is now revered as a major religious state. With the Heaven Lord Vesta as the Vestarians’ chief deity, the Shrinedom holds authority over the seven other nations. Its leader is Pontifex Neylea (Netolf Leah Lyra), said to be the daughter of Vesta.

The Seven Kingdoms of Vestaria 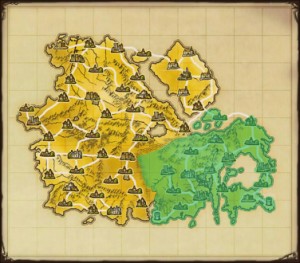 An old kingdom that governs the south-eastern part of the island. Its founder is the Hero Warrior Silverbirch, nicknamed the “Red-haired Fierce Lion”. It is Vestaria’s strongest nation and the sole point of trade with the Solvian Empire, which controls the mainland. It has four autonomous duchies (allies) under its umbrella–the game’s hero Zeid belongs to one of them: the Duchy of Redessa. Meleda’s Princess Atolfis serves the Shrinedom as the “Star Priestess”. 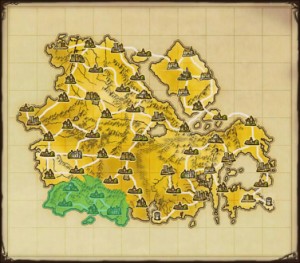 An oligarchic republic city-state located in south-west Vestaria. Descendants of the the Priest Warrior Sedika of the 5 Heroes formed this nation around the nobility. The current Governor is Duke Lytton. His only daughter Nyna was chosen to be the “Earth Priestess”. 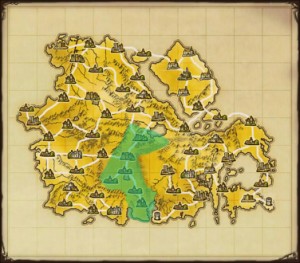 A majority of the land is grassland, where herders and numerous horseback tribes live. 200 years ago, the hero Am Solim appeared and united the grassland tribes, giving birth to a new nation. Of the 7 nations, it is the only one without Udagal heritage. 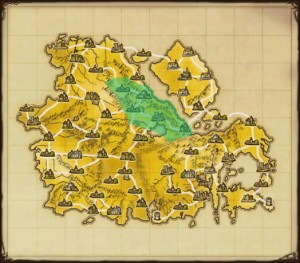 A tribal nation located in the northern mountainous region of Vesta, home to the aboriginals. The kingdom consists of 7 tribes and the ruler is chosen according to their mutual agreement. Its founder is the Sky Knight Albarran. 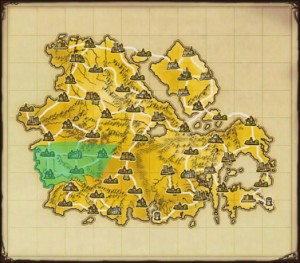 A city-state created by the Wandering Mage Sphere. Its royal capital boasts the largest mage academy on the island and is the birthplace of two priestesses. Recently, there was a tragic incident at the royal palace, which resulted in the deaths of many royal family members. Thereafter, the sole surviving princess, Sybil, ascended as queen and ruled over the nation. 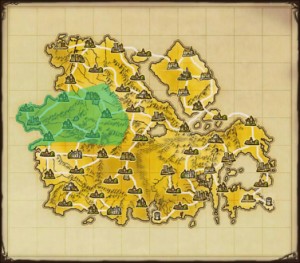 A nation of knights in the island’s west. Its founder is the Crusader Wolfgang. Once a major power that rivaled Meleda, but following a long civil war it divided into two. The previous king died mysteriously, so the 15 year old Prince Marion ascended the throne, despite having little interest in political affairs. Instead, the nation is ruled by the scheming prime minister. Marion’s twin sister Marien served as the “Moon Priestess” but her whereabouts are unknown. 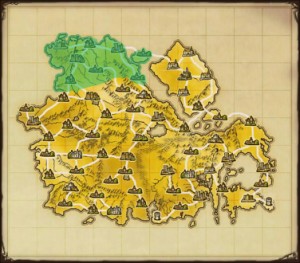 A militant nation located in the north-western part of the island. 80 years ago, after a long struggle, it broke away from the Kingdom of Lestia, which was the strongest nation at the time. Despite the incident starting as a power struggle between siblings, it ended up dragging other nations into its bitter war. In the end, by Vesta’s intervention, the nation was divided into two. The current ruler is Lucius, who ascended at the age of 19 following the previous king’s death by illness. Lucius’s younger sister Adelheid served as the “Sun Priestess”, but…

A large empire that governs the Continent of Celeron, located east of Vestaria Island. Because Celeron is ruled by its 5th ruler, it is also referred to as the “5th Dynasty of Celeron”. Its current emperor is Manneus, widely considered a wise ruler. Below him is Aias, a famed general known as the “God of War”.