Fire Emblem Echoes, the Nintendo 3DS remake of the 2nd game in the series, Fire Emblem Gaiden, will be released in Japan in just over 2 month’s time. 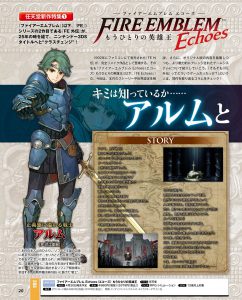 In the meantime, besides updates from Nintendo themselves, we can usually rely on the gaming press to drip feed us information–and Famitsu is usually one of the first to do so.

The 2nd March issue of Weekly Famitsu, which came out in Japan today, includes an introduction to Echoes spread out across 4 pages. Most of the information is about things we already know, but there are some new bits and bobs.

The first page explains the basic premise of the game. In short, it’s a fully re-imagined version of Gaiden. The huge “Story” block is simply a transcript of the text from the announcement trailer.

What is (somewhat) new is the profile for Alm.

One of the main characters of the game. He was raised in Ram Village on the borders of the Kingdom of Zofia, together with Celica. Trained by his grandfather Mycen, he has developed a formidable sword arm. Because of his strong sense of justice and desire to show off his strength, he volunteers to join the Zofian Liberation Army to combat the Rigelian Empire. His initial class is Fighter, which is skilled with swords. 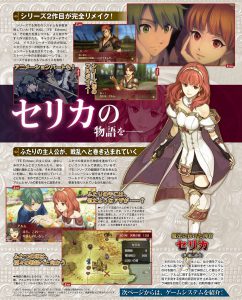 The top part discusses the new things Echoes adds to the table, such as the new character designer, animated moves, voice acting in dialogue scenes–all things talked about in the Fire Emblem Direct.

Similarly, the bottom part explains how there are two main characters and you can progress through the world map individually. Which is par for the course for Gaiden.

The screenshot of Alm and Celica during their childhood may be new to some, but it was shown off during the announcement of the Chinese version a few days ago.

The other main character of the game. She spent her childhood days with Alm, but afterwards left Ram Village for some reason and lived at Novis Monastery as a Priestess. After having an ominous dream about Alm–and to uncover the truth behind the large number of strange happenings across the Kingdom of Zofia–she begins a journey to the Temple of Mila. Initial class is Priestess.

The third page contains the first nugget of information.

That said, Gaiden allowed players to resurrect characters a limited number of times (by visiting certain lion head statues), so it’s unclear if this system will be making a comeback. Given Echoes’s track record, we’re sure it will be…

The top-left box recaps the world map system from Gaiden, where towns and dungeons can be found, and includes a new screenshot of Alm on the world map near the very beginning of the game.

The information from the windows:

Meanwhile the top-right box talks about the 3D dungeon exploration. The screenshot here is also new, showing Alm deeper within the Thief Shrine, but doesn’t offer any new insight (besides looking really cool). 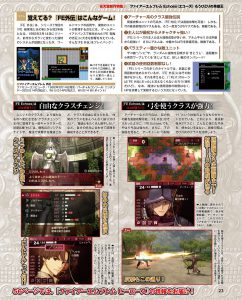 Finally we have Page 4, which begins with a look back at Gaiden and what made it unique for the author. Apparently he/she idiolised Archers because of their huge attack range and really appreciated how Alm and Celica were powerful main characters, etc.

Speaking of Archers, we learn that Archers in Echoes have the “Bow Range +1” attribute (possibly a skill?). Thus giving them a range of 1~3 when using a standard “Bow”.

The last piece of new information is a bit of an odd one. Next door, we see Tobin about to change class to a Cavalier. Here, the author has highlighted a curious item on the bottom screen–a Carrot.

Sadly the author doesn’t seem to have a clue what it’s for (or is teasing us). The most obvious explanation is that it’s related to the “Food” command accessible when moving a character. Perhaps characters can eat food to temporarily boost stats like in Fates?

By the way the Cavalier has an attribute too (“Horseback”), but it merely looks to be a weakness or movement type identifier.

(A massive thanks to Famigeki for the images!)