Anyone with vague knowledge of Chinese can probably tell from the video that Yamagami absolutely does not know Chinese, but you can’t fault the man for trying, nor for his unyielding enthusiasm.

In any case, the biggest news is that Fire Emblem Echoes will be the very first Fire Emblem game to receive an official Chinese translation, much like how Pokemon Sun and Moon were the first Pokemon games to receive one.

(Previously, there were Fire Emblem games on the 3DS released in Chinese territories, but they were simply the Japanese version.) 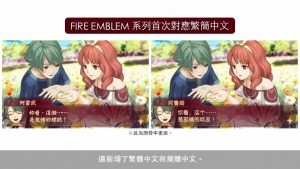 Like Pokemon Sun and Moon, there will be Simplified Chinese and Traditional Chinese text, although it’s unclear if players can choose between the two via an in-game option or they need to buy a separate version of the game.

To illustrate this, they showed off comparison screenshots from the game, including a previously unseen screenshot of Alm and Celica from their younger days.

While the text will be in Chinese, the voice overs will remain Japanese to “preserve the authenticity of the game”. (As far as we’re aware, Chinese fans are incredibly serious about Japanese dubs.) 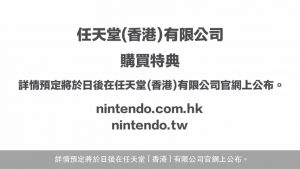 Additionally, there will be pre-order bonuses, which will be announced on Nintendo Hong Kong and Taiwan’s official websites when the time is ready.

Although funnily enough, the video thumbnail tells us that the Valentia Artbook from the Japanese Valentia Complete will be at least one of them.

Before leaving, Yamagami revealed another piece of exciting news for Chinese Fire Emblem fans–and that is Fire Emblem Warriors will be getting the full Chinese translation treatment too!