A week after announcing the official Chinese version of Fire Emblem Echoes, Nintendo Hong Kong has posted some Chinese screenshots of the game on their Facebook. 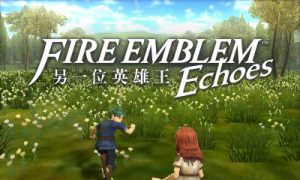 The first screenshot shows young Alm and Celica hurrying towards a meadow. What’s rather curious is the presence of the game logo (Fire Emblem Echoes: Another Hero-King), which can mean one of two things.

Either this scene is from the game’s title screen (or accompanying demo) or an introductory sequence. We have reason to believe the screenshot is from the latter, since it seems to lead straight into the second screenshot posted.

This next screenshot we’ve seen already in the trailer for the Chinese version and also from the recent issue of Famitsu. 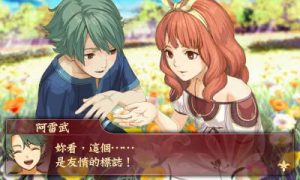 The dialogue is the same as before, with Alm telling Celica that their birthmarks serve as proof of their friendship.

However we now have a little more context; judging from the meadow background, it’s very likely that this scene takes place right after the first screenshot.

Because there’s a prompt to advance the text in the bottom-right corner of the screen, we can deduce that this screenshot (and the first one as well) occurs during regular gameplay and not during a non-interactive title screen or demo. 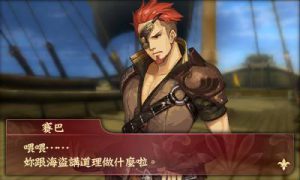 The third screenshot is of Saber speaking to Celica. In case you missed it, Nintendo UK posted the same screenshot in English earlier this month.

The text here says “Oi oi, why are you even bothering to reason with pirates.”

Although it might sound slightly bland compared to the English version, this is standard fare for straight Chinese (or Japanese) to English translations  When read in Chinese, this line sounds perfectly natural and nuanced.

However because Chinese and English are two very different languages, these nuances simply do not carry over in translation and it requires a lot of skill to adapt the translated text and make it sound interesting again. 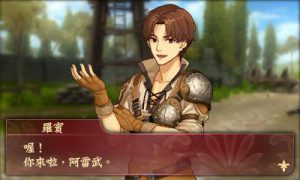 The fourth screenshot is of Tobin (previously known as Robin; probably changed to prevent confusion from the character in Awakening) speaking to Alm. You may recognise this screenshot from the initial reveal trailer.

Just like the Japanese version, the text here reads “Hey! You came, Alm.” 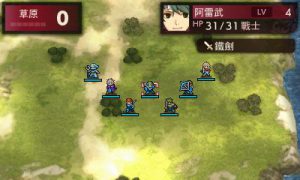 Finally we have a screenshot that seems to be from near the beginning of the game. By this point, Alm’s party has already cleared the Thief Shrine since Silque the Cleric can be seen towards the far left (and the Villagers have all changed class).

What’s odd is that Alm is equipped with an Iron Sword, which did not exist in the original Gaiden. Instead, in Gaiden, Alm’s first sword was a regular “Sword” and then he got the Levin Sword before the end of Chapter 1.