After a quiet spell, we finally have some new details about Fire Emblem Warriors courtesy of preview images of this week’s Famitsu, which releases this Thursday. 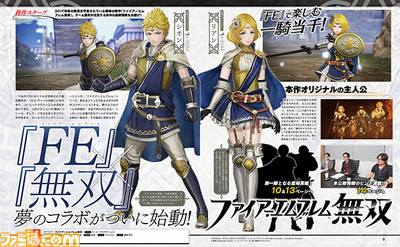 As expected, Warriors will feature original characters in addition to the existing heroes from throughout the series–starting with twin protagonists Shion and Lian (names are subject to change).

At the moment, we only have tiny images to go off, so it’s impossible to make out any concrete information about the duo. We do see both of them with Marth in the screenshots, so presumably they will exist simultaneously in the story. 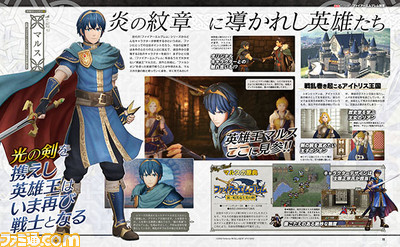 The second preview image focuses on Marth from Shadow Dragon–the second fighter to be confirmed, following Chrom from Awakening. As the hero of the very first Fire Emblem and one of the series’s icons, his addition shouldn’t come as a shock.

In the top-right corner, there’s a mention of the Kingdom of Aitriss being engulfed in war. One can assume this is the friendly nation that Shion and Lian hail from–and we would not be surprised if they were Idrisian royalty.

To the left is a screenshot of Marth shaking hands with a currently unknown character. It’s definitely not Shion or Lian due to the different hair colour and clothes and it’s also hard to tell if it’s an existing character or a new one.

That’s about it for the previews, but this week’s issue will include at least 2 more double-page spreads. The two pages after Marth focus on Chrom, while there’s also a staff interview at the end. (The numbers 10 to 13 refer to Marth and Chrom’s pages.)