Famitsu’s official website has shared a tiny Fire Emblem Warriors-related snippet from its next issue, which arrives on Japanese bookshelves on 3rd August. 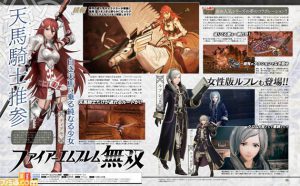 We learn that Cordelia, the exceptionally skilled yet humble Ylissean Pegasus Knight, and the female version of Robin the Tactician will be joining the previously-announced Awakening warriors on the battlefield.

The accompanying text also states that the magazine will be delving into key gameplay mechanics such as effective damage, the weapon triangle, as as well as Classic and Casual (modes, presumably).

In Classic, fallen characters cannot be re-deployed, mimicking permanent death in the main series games, while this restriction is removed in Casual. Earlier, the developers had teased permanent death, so it’ll be interesting to see how it works here.