As promised earlier, we have some new Three Houses information courtesy of Famitsu! The latest issue of the influential Japanese gaming magazine includes 6 pages to introduce readers to the game, ahead of its 26th July release. 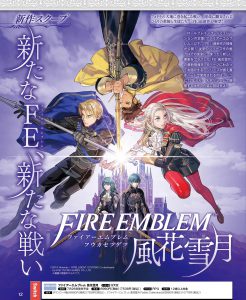 (Images sourced from Nintendo Everything)

The first page shows off the game’s key art, which you’ve probably already seen before, on the game’s box art for example. The rest of the page has stuff you already know about or don’t really need to know. 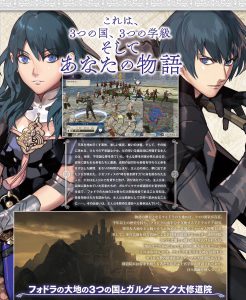 The second page has close ups of male and female Byleth’s official artwork, which are new to Famitsu 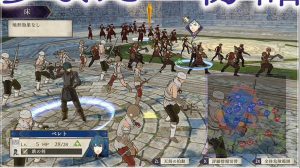 The screenshot near the middle seems to depict Byleth once again leading the Black Eagles (as Caspar is visible). Of note, there’s a slightly blurry mini map in the bottom-right corner that seems to show 9 playable (blue) units. Byleth currently has 4 Movement.

Update 2: My apologies, there are only 9 playable units not 10. This is evident from a newly acquired clearer screenshot.

Below the mini map are three button prompts. ZL triggers Skyrending Pulse (more on that later), X toggles the detailed info display and ZR enables the Danger display (every enemy’s attack range at the same time).

Underneath the screenshot is a story blurb, which I’ve translated:

Armies flooding the plains, a violent clash, a battle’s end. Then a mysterious girl appears. Night after night, the protagonist–a member of their father’s mercenary band–always experiences this strange dream. One day, after having the same dream multiple times, they found youths being attacked by bandits. The protagonist shielded the youths from a bandit’s blade and, at that moment, time stopped and the girl from their dreams appeared. The girl Sothis saved the protagonist’s life by using her powers to rewind time. She allowed the protagonist to borrow her power and vanished. The protagonist discovers that the youths attacked by the bandits were students from the officer’s academy at the Garreg Mach Monastery–and the future leaders of the three largest nations of Fódlan. After saving the youths, the protagonist’s power was recognised and they were invited to the academy to become a professor. This invitation will forever change the protagonist’s fate…

Below that is a blurb about the continent of Fódlan, but it doesn’t mention anything we didn’t know already from Nintendo Direct trailer. 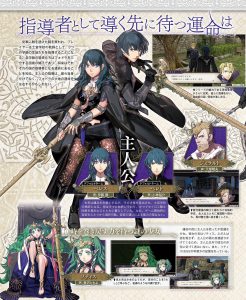 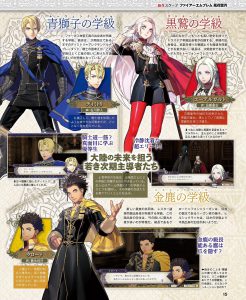 Pages 3 and 4 are all about the characters! 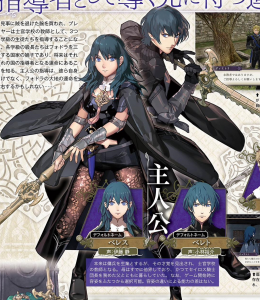 Originally a mercenary-for-hire, but after their power awakened, they became a professor at the officer’s academy. Their mother passed away and they lived with their father, who once served as the leader of the Knights of Seiros. At the start of the game, you can choose from two appearances (the abilities are the same for both). 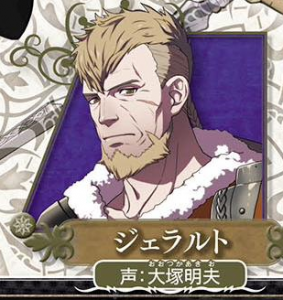 A legendary figure considered the strongest knight in all of history. He was invited to the monastery alongside the protagonist and re-joined the Knights of Seiros. 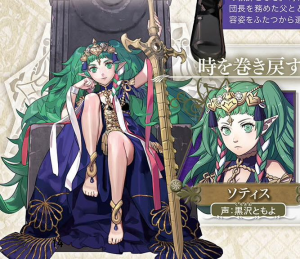 A mysterious girl who saved the protagonist during that fateful night. Her name is Sothis. She does not physically appear, appearing only inside the protagonist’s mind, so nobody except the protagonist knows of her existence. Also, Sothis seems to have lost all recollection of herself. 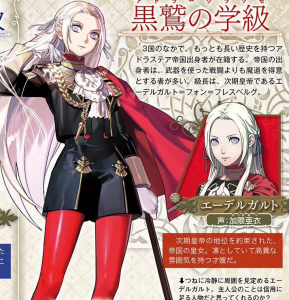 The imperial princess who was promised the position of the next Emperor. She’s a talented woman with a responsible and dignified air to her.

As you may know, Edelgard is the House Leader of the Black Eagles, home to students from the Adrestian Empire. Apparently, Adrestian students are more likely to favour magic over weapons. 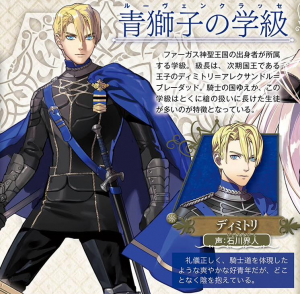 A courteous and refreshing young man who embodies chivalry, yet he carries a shadow.

Dimitri is the House Leader of the Blue Lions, where students from the Holy Kingdom of Faerghus gather. Since Faerghus is a realm of knights, many of its students favour the lance. 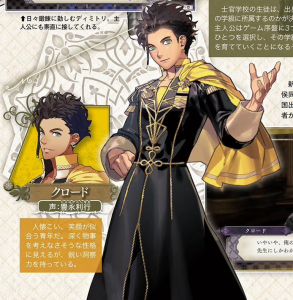 A young man who’s sociable and smiles. He has the look of a person who carefully considers things and possesses a keen insight.

Last but not least, Claude is the House Leader of the Golden Deer, where students from the Leicester Alliance report to. The students here generally favour the bow and are typically commoners as well. 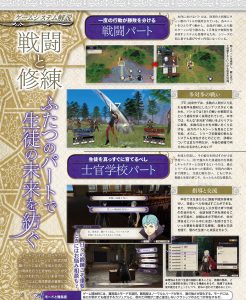 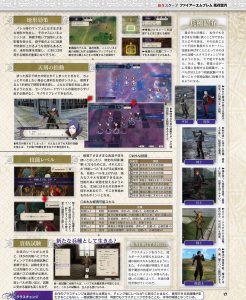 The last two pages cover some of the basic gameplay. Page 5 is mostly stuff we already know about. 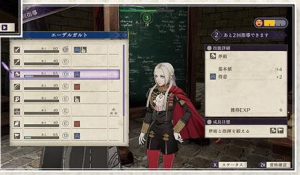 There’s a screenshot of Edelgard receiving a lesson in the bottom-right corner. She’s adept in Sword, Axe and Authority. That makes sense. But she’s weak at Bow and Faith. She also has 3 stars next to Reason, but I don’t know why.

Her current learning focus is Axe and Authority–that’s probably a good idea to work on her strengths. Lastly, there’s a teacher bonus for Sword and Fighting (indicated by the fingers pointing up). I’m guessing that’s the protagonist’s bonus? 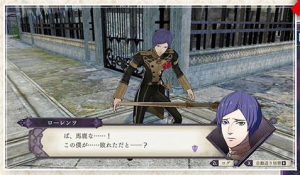 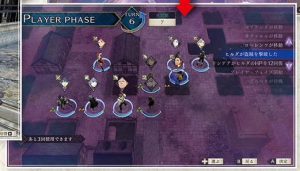 Skyrending Pulse (will probably be named differently in the English version) is Three House‘s version of Mila’s Turnwheel.

It seems you can rewind turns–and individual actions within each turn–to undo fatal mistakes. Like the turnwheel, you can use it a limited number of times per battle (currently it’s shown as 3).

In the example, we see Lorentz being defeated. Oh, this time the player is controlling the Golden Deer! In the battle map, we can see female Byleth, Claude, Leonie, Raphael, Hilda, Lorentz and 3 unknown characters.

However, if you check the slightly blurry rewind history, there are two additional names: Marianne and Lysithea. I think Lysithea is the greyed out character immediately below greyed out Hilda. The history says she healed Hilda, although she seems to be equipped with Reason and not Faith magic (but there could be a reason for that).

Update: Thanks to Cysx, I corrected the possible identity of Lysithea. That probably means the character immediately to the right of female Byleth is Marianne, but that’s just a guess. The third character is the short-haired boy with glasses. 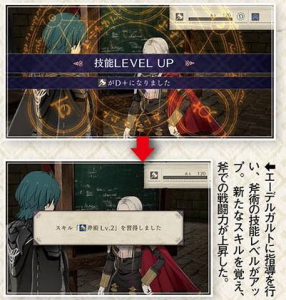 The next topic is Professor Levels. These are aptitudes that every character has and include: Sword, Lance, Axe, Bow, Fighting, Reason, Faith, Authority, Heavy Armor, Riding and Flying. Reason encompasses black (offensive magic in Echoes) and dark magic; AKA Anima in the GBA games. Faith is white magic (healing and sacred magic in Echoes).

Unlike previous games, it seems each character has all Professor Levels available in all classes. This was hinted at in the Nintendo Direct trailer, when characters had all available aptitudes at once. But that’s not to say classes are all the same. More on that in a second…

Update 2: Upon closer inspection, it seems that certain magic may be restricted by class. For instance, Commoners and Nobles can wield “some magic” while Monks can wield “magic” (without the “some”).

Anyway, by raising your Professor Levels, characters can learn new skills. Below are some examples:

In the example shown, Edelgard increases her Axe rank to D+, which grants Axe Level 2. 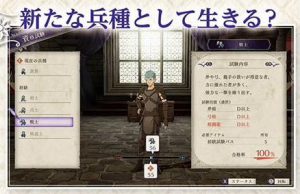 By upgrading a character’s Professor Levels, you can make the character undergo a Promotion Exam to Class-Change to a different class. In the example, it looks like Caspar is trying to become a Fighter. He needs a D or higher rank in Axe, Bow and a third aptitude I can’t read.

Update 2: Thanks to a better screenshot, we now know the third aptitude is Fighting.

Also, an item is needed to take an exam–in this case, it’s an Exam Pass. But the item may be different for other/higher classes. In this situation, Caspar has a 100% success rate, but it may be lower if you don’t meet the criteria. Curiously, there’s a meter near the bottom that could be related to the success rate.

Unlike other games, changing class does not always return the character to Level 1. Also, the weapons they can equip do not change. However, they will gain specific bonuses (presumably base stats) for each class, that class’s fixed skills and also certain aptitudes may grow faster in that class.

Furthermore, Famitsu shared a few of the classes. These include Commoner and Noble, which the protagonist and students start as, depending on their birth. Afterwards, characters can class-change to certain base classes at Level 5 or higher.

Update: Fixed the wording a bit. Originally I said all characters started as a Commoner or Noble but I over generalised what the article actually said. 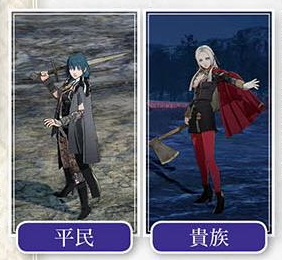 Able to wield some magic; a fairly non-distinctive class.

Female Byleth is shown as a Commoner, while Edelgard is a Noble. 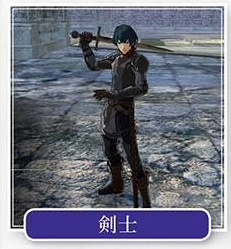 A class that excels in the sword. Speedy and adept at evading attacks. 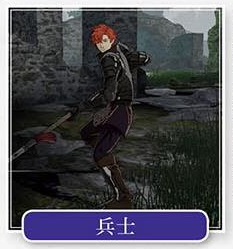 Skilled at lance-fighting. They have great dexterity and are good at attacking. 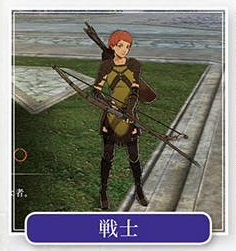 A class with a strength bonus. In addition to axes, is skilled with bows.

I think that’s… Leonie? It’s getting past 2 am and my eyes are starting to get hazy… 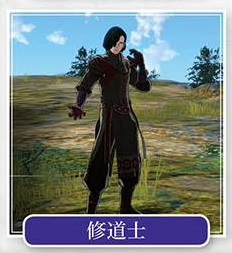 Able to harness magic, of which there are three types: white, black and dark.

This guy looks like the unnamed male from the Black Eagles. But don’t quote me on that.

Finally, Famitsu reports that only Normal and Hard, as well as Classic and Casual, are available when you start the game. Right now, it’s unclear if additional difficulties are unlocked afterwards–or if that’s all we’re getting.