Yesterday’s reset in Fire Emblem Heroes brought us the last event listed in the previous calendar. However, Feh doesn’t want to leave us waiting too long for news; the July & August 2019 Event Calendar is already here! Check it out: 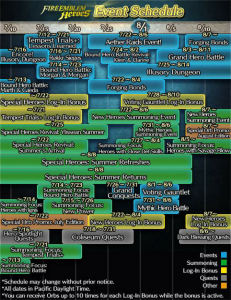 There are a few exciting things coming up soon, it looks like. First up is a mysterious Aether Raids Event which will start on 22 July. We’ll also be getting some New Heroes and Forging Bonds on the same day, and then again just a couple weeks later on 7 August!

Additionally, a new Mythic Hero will be arriving at the end of the month! We’ll also be getting one final new character with the unnamed Grand Hero Battle beginning on 3 August.

Other highlights include other events, such as: a new Bound Hero Battle featuring both Morgans, Røkkr Sieges, Voting Gauntlet, new Quests, Grand Conquests, lots of summoning banners, and more. You can see a full text breakdown below the “Read More” link below.

Last up, a new Tactics Drills: Skill Studies is now available! Beat it to earn yourself 300 Hero Feathers.