Intelligent Systems have formally announced details for the Fire Emblem Premium Arrange Album II, which contains music to be performed at the upcoming Fire Emblem Expo II event during early May 2020. 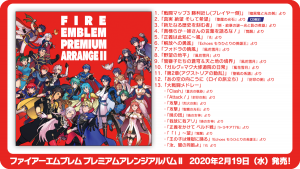 As mentioned previously, the album will be released before the event itself. This is because there are some new vocal songs and they want to encourage fans to learn the lyrics so they can follow the songs during the live concert.

We now know when exactly it’ll be released: 19th February 2020. It will retail for 3,200 Yen (including tax). As is often the case, the album will be released in Japan only. However, there’s a good chance that import stores will be carrying it.

For the record, the album contains most of the songs from the concert, but not all of them. On the other hand, it features an exclusive song that won’t be performed at the concert: “Truth, Despair and Hope” from The Sacred Stones.

The website promises preview samples at a later date.