Heroes: Regarding the Absence of a 4-star Focus Hero in the “Dark Burdens” Summoning Event

This information was shared earlier, alongside the release of the “Dark Burdens” summoning event, but we wanted to point it out separately.

You may have noticed that “Dark Burdens” doesn’t have a 4-star Focus Hero. As fans have pointed out, this contradicts what Fehnix said in an earlier Feh Channel, where it seemed all “New” and “Special” Hero banners would have at least one Hero with a 4-star focus rate.

Likely prompted by messages from confused fans, the Fire Emblem Heroes team posted a response via the in-game Notifications. 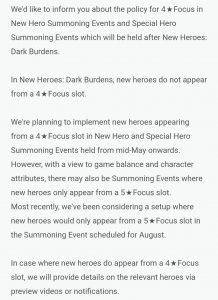 In short, 4-star Focus Heroes will be returning for future banners, but there may be exceptions. Most notably the current “Dark Burdens” banner, plus an upcoming banner in August, which would align with this year’s Brave Heroes–winners of Choose Your Legends 4.

The rationale provided was due to “game balance and character attributes”. We’ll just leave it at that…

In any case, it’s reassuring to know 4-star Focus Heroes aren’t completely off the table. So far, we’ve had Young Marth, Forrest, Spring Narcian, Ferdinand, Rath and Valentine’s Conrad. Perhaps their biggest contribution is allowing Summoners to easily obtain (and power up) a seasonal unit.