After Sunday’s Nintendo Direct megaton, it was uncertain if this week’s Famitsu would have much new to report about.

At this point… it’s still uncertain. While we wait for more details to leak (or the digital issue tomorrow), enjoy some new characters. 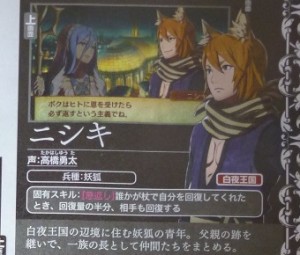 A fox spirit youth who lives in a remote region of Hoshido. Following his father’s footsteps, he acts as his clan’s leader and keeps his people in order.

Personal Skill [Gratitude] When an unit uses a healing staff on the user, that unit has their HP restored by half the same amount.

Note: A fox spirit (Yokou) is a creature from Japanese folklore known for tricking people with their shape-shifting abilities.

Whether Nishiki is more like Xane from Shadow Dragon (who can mimic allies) or the Laguz/Taguel (transforms into animals to attack) remains to be seen. 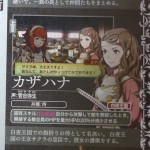 Well known as one of the best samurai in Hoshido. She is princess Sakura’s loyal subordinate and serves as her personal guard.

Personal Skill [???] When user’s attack KOs the enemy, all adjacent enemies have their HP reduced by 20% of their max HP.

Fights astride a pegasus. Though his conduct suggests he’s a shallow man, he’s actually very demanding on himself. 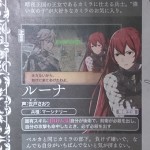 A soldier who reports to Nohr’s princess Camilla. She is a favourite of Camilla who has a liking for “powerful girls”.

Personal Skill [Ambush Duty] When the user attacks an enemy who cannot counter-attack, damage increases by 4.

Camilla’s subordinate, alongside Belka. Hates to lose and isn’t satisfied until she’s the best at everything.

Personal Skill [Competitive] When user is the rear unit, if the front unit triggers a critical hit, the user is guaranteed a critical hit (if their attack connects).

Note: Luna is voiced by Saori Seto, who also voiced Severa. Adding in the fact both characters are Mercenaries and look nigh identical, this surely cannot be a coincidence… 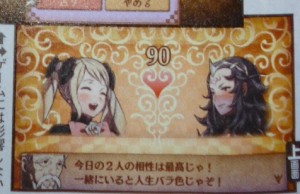 “Hubba” thinks Elise and Nyx will get along great.

Despite her youthful appearance, she has an incredibly grown up personality. She lives a quiet life in Nohr.

Personal Skill [???] When the user sustains damage from an enemy’s magic spell, the enemy also receives half of the same damage.