Another Summoning Focus will be arriving soon in Fire Emblem Heroes! Nintendo Mobile has released a new preview trailer for the upcoming Children of Fate banner. Check it out below!

The banner contains new 5★ heroes for three of the children units from Fire Emblem Fates: Soleil, Shiro, and Siegbert. Each comes with a new weapon and at least one other new skill. Check out their details below! The banner will be available starting on Monday, 4 December.

Additionally, the trailer contains a teaser for one other child of fate that will be releasing soon: Rhajat. Rhajat does not appear in this banner, instead making her debut in one of two banners for the upcoming Enduring Love Voting Gauntlet. 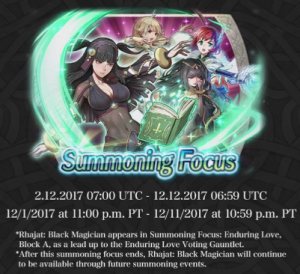 The other three characters that will appear in this banner along with Rhajat are Tharja, Faye, and Priscilla. We don’t yet know who the other four characters in the gauntlet will be. Both banners will be available starting tomorrow, 2nd December, with the Gauntlet itself starting on the 6th after the Tempest Trials have concluded.

Finally, a new month also means new monthly quests! 3 new December Quests are available in game, waiting to reward you with Orbs, Hero Feathers, and other goodies. Check out the full quest listing below.