A new event type has just begun in Fire Emblem Heroes! Head over to the Events menu to play the first ever incarnation of Forging Bonds. As a gift for the new game mode, everyone also gets a one-time gift of 20 Orbs!

Forging Bonds is a new event type that aims to give more characterization to the heroes of Heroes. Like Tempest Trials, the event begins with a short scene to set the story. Bandits are attacking a village, and the Ylissean forces are outnumbered. Thankfully, the Order of Heroes arrives to sway the tides of battle! 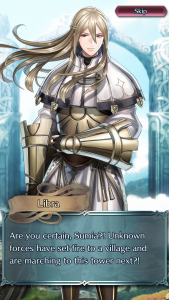 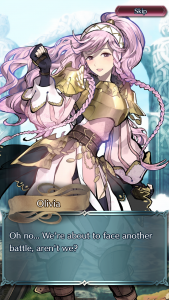 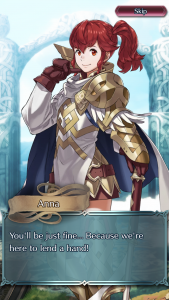 Fight battles to gather Friendship and earn rewards. In addition to Orbs, Hero Feathers, and other goodies, you can also unlock special Conversations with heroes. Do you best to see all the conversations for Olivia, Sumia, Maribelle, and Libra!

This first Forging Bonds event will last two weeks, ending on 6 August. Scroll on below for more details about the new game mode.

As shown in the recent Feh Channel, Forging Bonds will still contain battles between your heroes and some enemies. When you defeat an enemy, they will sometimes drop a special chest that holds Friendship. 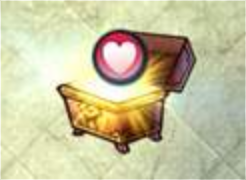 Friendship is the main currency of Forging Bonds and is used to unlock most of the event’s rewards. You’ll be able to choose between Beginner, Intermediate, and Advanced levels, with harder difficulties offering more Friendship. Regardless of which difficulty you choose to fight, enemies will scale to your team’s level. 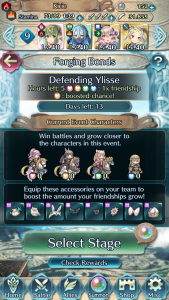 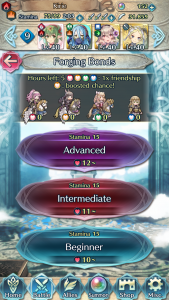 Each Event Character will have their own Friendship currency (denoted by heart colour) for you to earn. At different times during the event, the amount of Friendship earned will be boosted, and there are other times when it will be easier to earn Friendship for a certain hero.

The amount and type of Friendship earned will update every six hours, so it’s good to check back frequently if you can, especially if there’s a particular hero’s conversations and rewards that you still want to complete.

Additionally, equipping Bonus Accessories on the team you’re using to fight will boost Friendship earned by 25%! Unlike Bonus Allies in TT or similar, Bonus Accessories do stack, so equip everyone on your team for the best results!

Earn Friendship for each of the four Event Characters to unlock rewards. Forging Bonds rewards work like TT scoring, with each reward unlocked as you gain more Friendship for that particular hero. Here’s an example screenshot of the bottom of Olivia’s Reward page: 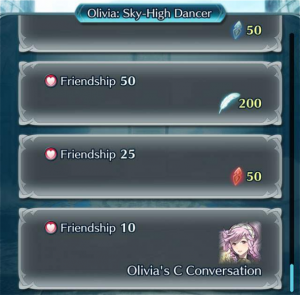 At 10 Friendship, you unlock Olivia’s C Conversation, followed by 50 Scarlet Badges at 25 and 200 Hero Feathers at 50. At different points, you’ll also be able to earn other rewards.

Here are some of the rewards highlights:

You also get 1 Orb the first time you complete a map each day while the event is ongoing!

The main focus of the event is, of course, forging bonds with characters. As you earn Friendship for each of the main characters, you’ll unlock Conversations with them, which are similar to the Support Conversations found in some FE games. It’s worth noting that you do not have to have the specific hero in your Barracks in order to converse with them. 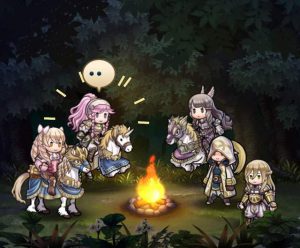 Conversations immediately begin the moment you’ve earned the necessary amount of Friendship. Once unlocked, you can view them again in the Event Recap section of the Miscellaneous menu. 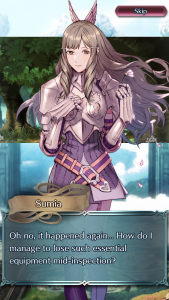 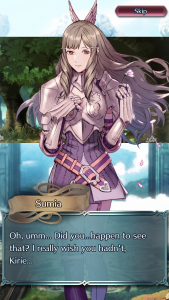 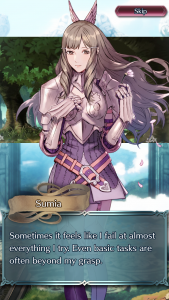 These conversations do not affect Summoner Support value or anything else gameplay-wise.