The teaser probably took most of us by surprise, with that Tyrfing-looking sword in the silhouette, but what shook me was not just the twist of what it actually was, but who the rest of the gang turned out to be.

Enter the next Special Heroes banner, Greil’s Devoted. Ike’s father, Greil, appears to take the stage, along with Ike himself, Mist, and Soren, in this new banner, and there are a few twists in not only the units that we’re receiving, but their skills and movement types. We are receiving a handful of awaited skills, and also, Fury 4. This is sure to shake up the metagame some more. Even if the unit stat spreads are not appealing (and it’s hard to imagine that they won’t be), the weapons looks pretty good on paper, sporting a universal +3 to all stats bond ability, that is sure to pair nicely with Sacred Seals and other bond skills owned by your squad.

Not only that, but Titania: Warm Knight (a Red Tome Cavalry), will be joining the fray, as a Tempest Trials+ reward unit. Her tome doesn’t look like a X-Blooms variant, so I wonder if it follows the Spectrum-Bond theme of the other four unit’s weaponry. 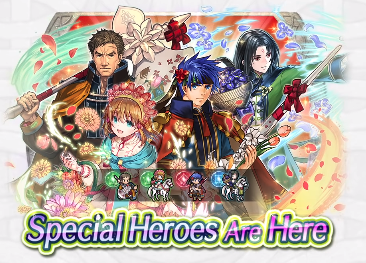 Greil’s Devoted kicks off on February 8 at 11p PT (my birthday, coincidentially), and wraps up on March 8, so Summoners, there’s plenty of time to give this your all, should you desire one of the quartet!

For a full breakdown of the units, click Read More.