Five brand new characters will soon be making their way to Fire Emblem Heroes! Check out the latest New Heroes: From a Future Past preview trailer below. The trailer gives the first glimpse at four Awakening children units: Yarne, Kjelle, Brady, and Nah. Click the “Read More” button below for a look at their new skills.

A fifth new unit, Cynthia, will also be available as a Grand Hero Battle soon. You’ll be able to see all of these heroes in action in the latest main story chapter: Truth of a Name. The four gacha units will also be featured in a new Forging Bonds event, too, titled Spanning Time.

The New Heroes: From a Future Past banner and its associated story chapters and Forging Bonds will also go live Tuesday, 11 June. Cynthia’s GHB starts two days later on the 13th. 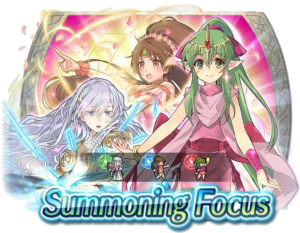 As revealed in the recent Feh Channel, we’ll be getting a new Revival banner each week! Revival banners feature older 5★ characters, and they’ll also appear at a raised 4% rate, making them more likely to pull than other 5★ characters of the same colour. You can see the full schedule for these banners in-game.