Unfortunately, there wasn’t a Famitsu Fire Emblem if leak yesterday; only a tiny preview image and a picture of Elfie’s portrait to keep us occupied.

To make up for it, however, somebody has generously leaked pretty much all of the relevant pages, just hours before the digital issue releases.

So without further ado, let’s dig into the contents…

To start with, Famitsu introduces the game’s Class Change mechanics, which are similar to in Awakening. Characters in a basic (unpromoted) class can use a Master Seal when they’re Level 10 or higher to promote into one of two advanced (promoted) classes.

The example given is Hinata, a sword-wielding Samurai (a renamed Myrmidon), promoting into the Trueblade (a renamed Swordmaster, which has superior speed and adept at landing multiple hits) or Weapon Master (a new foot-based class that wields Swords, Lances and Axes).

Like in previous games, promoting resets the character’s Level to 1, so they can continue to gain experience in their promoted class. However, new to this game is the Parallel Seal item, which we saw in Joker’s hands in the full Famitsu interview. 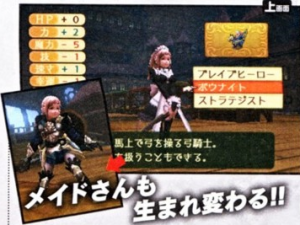 Presumably, other characters can become Maids too…

As suspected, the Parallel Seal acts like Awakening’s Second Seal, allowing characters to swap to an alternative class–the selection of classes determined by the character themselves.

But unlike the Second Seal, Parallel Seals do not reset a character’s Level and characters can only swap between classes from their “tier”; in other words, they cannot change from a promoted class down to an unpromoted class or vice versa.

Another example we’re given is Felicia using a Parallel Seal to swap from Maid to Brave Hero, Bow Knight or Strategist. This implies she has access to the Mercenary (-> Brave Hero/Bow Knight) and Rod Knight (-> Strategist/Maid) class branches. 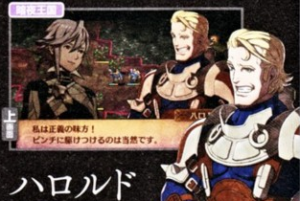 Harold is already gaining a following, it seems.

Next, the characters, starting from the left side and going from top to bottom:

A fledgling Nohrian knight. Has known the Avatar since childhood; an ally in both campaigns.

Harold (Fighter) [Nohr]
Elise’s subordinate. He fights with the belief that he’s a hero of justice; his one flaw is his exceptionally bad luck.

Hails from a family of samurais who have served Hoshido for generations. Hinata himself(?) serves under Takumi. Quick to quarrel, but thoughtful of his friends.

Takumi’s subordinate, who harbours a small crush for her(?) liege (Takumi). Because of her past experience, she possesses a stronger hatred for Nohr than most people.

A fighter born into the “Fire Clan”. Following her father–the chieftain’s orders, she fights to support Hoshido in their battle against Nohr.

Unlike Rinka, he was born into the “Wind Clan”. Despite his young age, a talented spellcaster. Hates dark places. 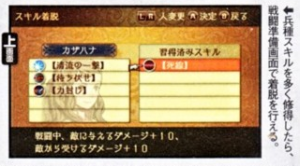 Get ready to grind for skills again!

In between the character profiles are details on the game’s new skills.

Just like in Awakening, characters can learn new skills as they Level Up in their various classes. Players can freely select 5 skills for each character, from all the skills that character has learned.

In the above screenshot, Kazahana has Flowing Strike, Vantage and Strength Seal equipped and a fourth skill in her skill bank. The fourth skill, whose name is too blurry to read but might be “Deathmatch”, boosts the unit’s damage by 10, but also their damage received by 10. Talk about risky!

As well as class skills, characters have a personal “fixed” skill, which is independent of their class skills and cannot be removed. This is the first skill in a character’s list–the one in the top-left corner that is bigger than the rest.

When acting as the support (back unit), if the front unit has a C or higher support, the front unit’s Accuracy is boosted by 10, damage by 2 and damage received reduced by 2.

When at half HP or lower, half the damage received by swords, lances and axes is also dealt to the enemy.

When the user’s Strength is 5 or more points higher than the enemy’s, damage increases by 3.

When engaging a Nohr-related enemy, damage increases by 3

When unit’s Level is lower than the enemy’s (promoted units count as Level +20), damage increases by 4

Substitute flips the position of two adjacent units on the map.

Defence Seal [Lancer Class]
After attacking an enemy, the enemy’s Defence is reduced by 6.

Substitute [Lancer Class]
On the map, the user can select an adjacent target to “substitute”. This makes the user and the target swap positions on the map, which would be useful for keeping wounded allies out of harm’s way.

You probably know the drill, but if you’re looking for discussions or potential new discoveries as they happen, do check out our forums!