The Sacred Memories banner is now live in Fire Emblem Heroes! Do your best to summon new 5★ versions of Myrrh, L’Arachel, and Eirika from The Sacred Stones. 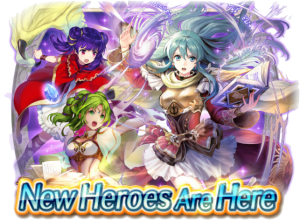 A new story chapter was also released along with the new banner! Book II, Chapter 4 “Fiery Resolve” continues the journeys of the Order of Heroes in their quest to defeat Surtr. The chapter contains five new maps for you to play on three different difficulties.

Additionally, there is also a new series of quests to go with the chapter update. Complete all five new maps on Lunatic difficulty under certain conditions to earn up to five more Orbs! See below for full details. A new Log-In Bonus will also keep the free Orbs flowing for the next ten days.

The Sacred Memories banner will be available until 9 February at 6:59am UTC. May you have the best of luck summoning some new heroes to add to your teams!