A new Tap Battle has just arrived in Fire Emblem Heroes! Flex your fingers and head over to the Events menu to tackle Illusory Dungeon: Farewells.

There have been a few recent Tap Battle changes lately that Heroes players may wish to make use of. Starting with the 2.9 Update, you can now swap sides to have your heroes on the right and enemies coming from the left. Starting with this Tap Battle, you can also earn Accessories as rewards! Nab the first one today by clearing Floors 6~10. 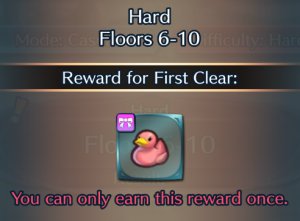 Illusory Dungeon: Farewells will be around for a whopping 33 days, ending on 12 October. Daily Quests start today and will last until 16 September, while a new set of Quests will begin on the 12th.

Additionally, the final round for Voting Gauntlet: The Chosen Ones starts today! Ephraim and Veronica beat out the competition and are now fighting head to head. This final round will last 45 hours, ending on Monday at 3:59am UTC. May the best hero win!