Summoners, we have a problem! A group of Heroes were enjoying an innocent picnic when a disruptive vortex suddenly appeared. If you want to restore their smiling faces, you’ll have to tame the new Tempest Trials+: Taste of Spring. 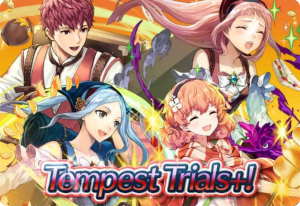 The maps in this Tempest Trial are pulled from Book I Chapter 11 and Chapter 12. Wow, that was ages ago… You can click here to view the final map (highest difficulty). The boss is Flora and she’s pretty deadly–be careful of her Armor March too!

As well as a bountiful amount of Orbs and other trinkets, you can earn a 4-star and 5-star copy of Leo: Extra Tomatoes (green-tome cavalry), Wind Boost 1, Even Res Wave 1 and Chill Atk 1 Sacred Seals.

To get the rewards quicker, you’ll want to field at least one of the eight Bonus Allies. The top four are from the latest new summoning event, A Season for Picnics, while the last three can be summoned from the Tempest Trials banner.

If you don’t have any of those seven Heroes because you’ve been unlucky or are hoarding your Orbs, you can grind a bit to earn Leo and use him as your Bonus Ally. Leo also has Distant Def 3 (4-star) and Quick Riposte 3 (5-star) in case anyone wants him for lunch.

The Tempest Trials runs for 10 days, ending after the daily rollover on 4th May 2019.