E3 has officially ended for Nintendo, but my job covering Three Houses isn’t over just yet! While E3 was happening, Nintendo’s Japanese website added a short article discussing the game. Also, the game’s official website updated with some new pages.

I’ll go over the topic article first. This article provides some additional context behind the new E3 trailer.

A Tale of Two Parts and Three Sides 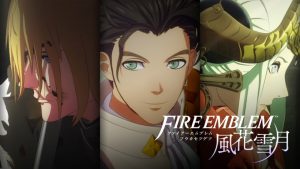 The story of Three Houses is told in two parts.

The first part is the “School Phase”, where you guide students as a teacher at the Officer’s Academy.

Meanwhile, the second part takes place 5 years after the academy days, in a Fódlan trapped in a three-way war between the three great nations. This part, where you must survive life and death situations involving the students who have grown up, is called the “War Phase”.

Additionally, the story in the “War Phase” branches out depending on the house you chose to lead at the start of the “School Phase”. In other words, you can enjoy three different stories in this game.

In the trailer, we see the three house leaders who have matured after a 5 year gap. Looking at their drastic new appearances, one can tell that they’ve been through many ups and downs through the 5 year period. 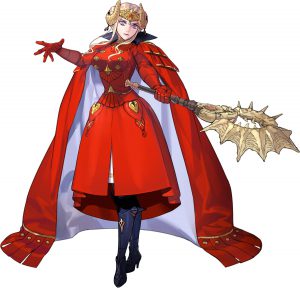 Former house leader of the Black Eagles. 5 years later, Edelgard von Hresvelgr is the name of the current Adrestian Emperor. 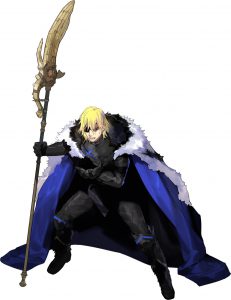 Dimitri Alexander Blaiddyd, prince of the Holy Kingdom of Faerghus and ex-leader of the Blue Lions house. His appearance during the “war phase” is a far cry of his earlier image of a nice, young man.

Who will stand with you, who will cross swords with you? 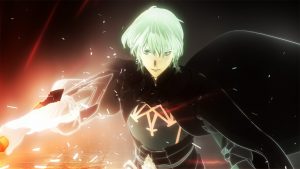 The ones leading the three nations in the “War Phase” are the former house leaders of the Officer’s Academy.

They are assisted by former students from their respective classes. 5 years later, they too have new appearances, as proof of their growth.

Together with the students who they originally led, the protagonist will thrust themselves into the war that has engulfed all of Fódlan.

Students who are happy to re-unite and fight alongside you in a world of conflict, students from other houses who re-appear as enemies with their own brand of justice.

Who will stand with you, who will cross swords with you?

Everything depends on the choice you made on that fateful day, when you decided which house to lead.

Fire Emblem: Three Houses launches on 26th July 2019. Which house will you choose?

…Ooh, dramatic. Now for the official website! This time, two sections have been updated: the Battles sub-section inside the Gameplay section and a new Classes section.

The first part explains the basic game flow. Battles are turn-based and during the Player Phase, you can move your units, to attack, heal, etc. Once the Player Phase ends, the Enemy Phase stats. 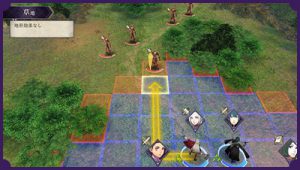 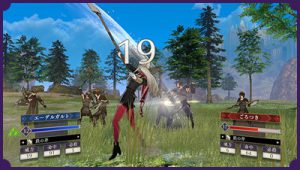 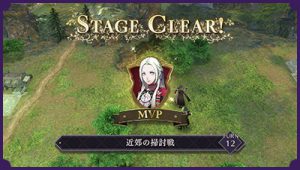 You move your units on a grid-based map. The number of squares you can move depends on the character. Fight enemies by choosing a target to attack and a method of attack. Once the conditions have been met (eg. the enemy has been routed or the leader has been defeated), you win.

Similar to recent games, the game will display the map’s MVP (most valuable person), as well as the turn count.

That’s the basics that I’m sure all of you know. But there’s a lot, lot more to battles.

The battlefield is a stage for armies to clash in heated battles. In this game, you can deploy knights for each unit. Units no longer have to fight alone and can charge into battle with their own group of soldiers.

Hiring and Deploying via the Knights’ Guild

Knights can be hired via the Knights’ Guild. Deploying knights will boost your units’ capabilities. Knights can Level Up through combat just like regular units, providing even better support. 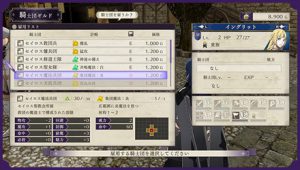 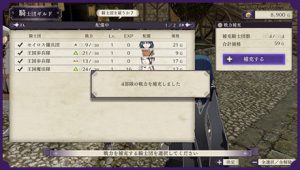 There are many types of knights, such as magic-based ones, bow-based ones, etc. The stats they increase can also vary.

When a unit takes damage, their knights will lose stamina. Once their stamina reaches 0, their supportive effects disappear, but you can replenish stamina back at the Knights’ Guild.

The screenshots provided are pretty dang tiny. Also, this info is nothing new. But if you want to learn more, please refer to the Famitsu article from 15th May.

Units deployed with knights can trigger Gambits, which are abilities that utilise their knights. The effect depend on the knights; some can attack multiple enemies at once.

Empire Cavalry come with the “Blaze” Gambit. In addition to dealing damage, the terrain inside the targeted area becomes “ablaze”, dealing damage to units that end their turn there.

Not all Gambits are offensive. For example, the Seiros Sacred Monks can restore the HP of all allies within the targeted area [using Resonant White Magic].

For those interested, this is the first time you can clearly see Marianne.

The Power of Bonds 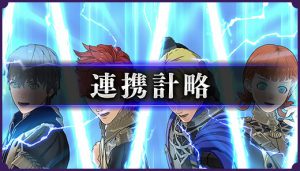 As you spend time on and outside the battlefield, you can build friendly relationships between allies. The bonds that you create can have a positive influence during battle.

When attacking a foe, if there are other allies that can target the same enemy, a “co-ordinated attack” occurs, temporarily boosting the attacker’s Hit Rate and Avoid.

When moving units on the battlefield, it’s a good idea to keep an eye on the placement of their allies. 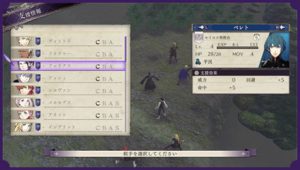 This particular screenshot has been doing the rounds because it seems to show all the possible Blue Lion romance options for male Byleth, as indicated by the “S” supports. However, there are no visible same-sex S supports, despite existing in Fates.

That said, I don’t think we’ve seen enough characters to know if they exist–or how many there are. After all, Fates only had one option per Avatar gender. 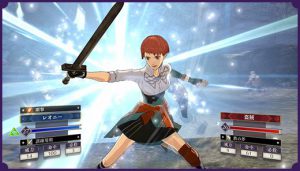 Besides performing standard attacks with weapons, each unit can fight using special battle skills called Combat Arts, which are acquired by increasing their skill levels, as well as Abilities granted from a unit’s innate and learned experience, as well as their class.

Note: “Skill levels” refer to aptitudes in weapons etc. They were previously known as “Professor Levels” in the February trailer. Meanwhile “Abilities” refer to special skills; they have apparently been renamed, probably to avoid clashing with skill levels. Also, the Skill stat is now “Dexterity”.

Combat Arts are special weapon-specific battle skills that are far more powerful and deadly than standard attacks. They can be learned by raising the “skill level” of different weapons via studying, etc.

However, Combat Arts expend more weapon durability compared to standard attacks. When a weapon’s durability reaches 0, it becomes broken and has drastically reduced Might and Hit Rate, preventing overuse. The “Breakthrough” Combat Art can learned from Gauntlets. After a fight, the user can move one square past the enemy. 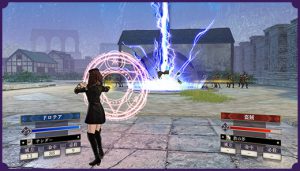 In the case of magic skill levels, you can learn new magic spells as your skill level goes up.

Cavaliers have the “Move Again” Class Ability. After performing an action, they use their remaining movement.

Thieves have the “Steal” Class Ability. They can steal non-weapon items from foes with lower Speed.

Update: I forgot to mention, but shields from Echoes are back; the item Ignatz is stealing is a Leather Shield. Unlike Echoes, you can equip weapons and shields at the same time. Nice!

Mercedes’s Personal Ability is “Live to Serve”. After healing an ally, her own HP will be restored.

Dedue’s Personal Ability is “Liege’s Shield”. After ending his turn without performing an action, his Defence will be temporarily boosted. 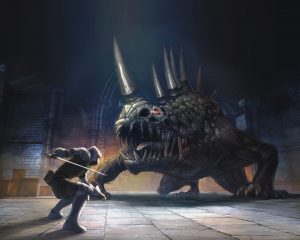 You won’t just be fighting humans.

These overwhelmingly powerful creatures possess vitality far surpassing that of humans, incredible attack power and a wide area of attack.

You’ll need to use every Combat Art, Gambit and the co-operation of your entire army to take them down. 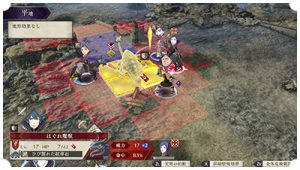 Because of their giant bodies, these creatures can occupy multiple squares on the map.

At the start, you can choose between 2 difficulty levels and 2 gameplay modes. (It’s possible to lower the difficulty after starting the game.)

With “Divine Pulse”, you can individual rewind actions taken during battle. This is handy if an ally has fallen in battle or you want to try a different strategy.

The moment you charge at the enemy, but your attack misses and you’re defeated… In such a scenario, you can rewind time with “Divine Pulse” and try a Combat Art with a higher Hit Rate. Now victory–and not defeat–awaits across the horizon!

The protagonist and the others can change to various class by taking Certification exams.

In this game, with the exception of magic and certain weapons, you can equip any type of weapon in any class, but some classes may fare better or worse with particular weapons. If you stay in a class that’s good with a particular weapon or magic, your skill level will increase faster, influencing your units’ growth. 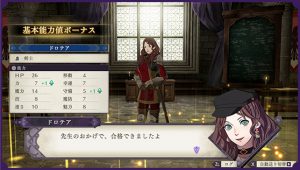 Higher-ranked classes may grant a stat bonus and may come with Class Abilities. The above screenshot shows Dorothea becoming a Myrmidon.

The rest of the page details all the Special, Beginner and Intermediate classes. However, all of this was previously covered by Famitsu and compiled in our Class page. That said, you can check out the pictures of characters in different classes.

Also, there’s a stat chart for every class. From the top and going clock-wise, the stats are HP, Strength, Defence, Dexterity, Speed, Magic, Resistance and Movement. Furthermore, recommended skill levels are provided.

Below is the list of classes and which character is representing them. 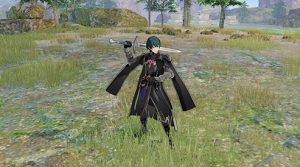 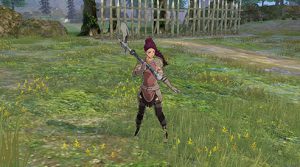 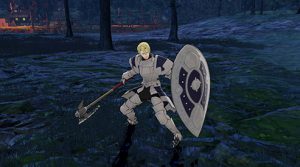 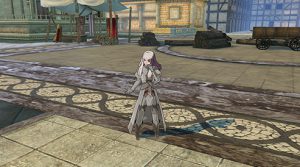 One last thing, a new song was added in the music selector in the top-left corner of the home page. You can also listen to it from here.

With that, I think I’ve covered pretty much everything Three Houses related from E3. …Man, I didn’t expect that much information!