Summer has come to Fire Emblem Heroes! It’s a bit later than expected, but the official Summer Returns preview trailer is now available. This banner contains swimsuit versions of some Book II characters: Gunnthrá, Laevatein, Laegjarn, and Helbindi. Check it out below! You can also click on the “Read More” below for a text breakdown.

In addition to showing off the new heroes, the trailer gives us a look at the latest paralogue, also titled Summer Returns. Additionally, at the very end, you can see Ylgr: Breaking the Ice, our upcoming Tempest Trials unit.

If you’re excited for these heroes, then you’re in luck. The banner just went live! Good luck adding some new swimsuit heroes to your team. You can also play the new paralogue and complete the associated quests for a few more precious Orbs. We also get a new Log-In Bonus as well! 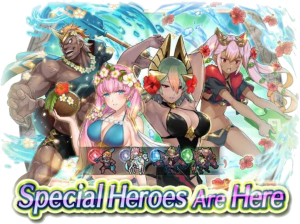 The Summer Returns banner and its associated quests will be available for one month, ending on 20 July.