Nintendo Mobile’s YouTube channel just released a new trailer for Fire Emblem Heroes! The trailer reveals the new characters that will be available in next week’s new banner: Rite of Shadows. It also gives a sneak peak at the accompanying Story Mode chapters. Check it out below! The new banner and chapters will go live on 15 May at 8:00am UTC.

As expected, the banner will focus on characters from Fire Emblem Echoes, this time from Celica’s army. The four new heroes are Celica, Boey, Mae, and Genny, three tome-users and one staff-user. Each comes with at least one new weapon or skill, as well. Detailed descriptions can be found below.

Additionally, @FireEmblemJP announced a surprise gift today for Echoes players! As a celebration of tomorrow’s Fire Emblem Cipher livestream, “Gift from the Goddess 4” can now be downloaded for free on Japanese copies of the game. The DLC includes a Villager’s Fork item, which allows you to reclass non-Lord units into Villagers. 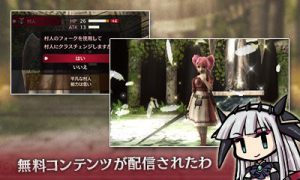 The Cipher livestream will include some further information about the Cipher collaboration DLC that will be available for Echoes. In addition to the datamined crossover DLC featuring the Cipher mascot characters, some DLC will also be included as a bonus in the Series 9 structured deck, which features cards of Echoes characters.

Celica comes armed with Ragnarok, a new, powerful red-type tome. Its HP-loss side effect references the magic mechanics in Echoes. She also has a new A passive skill called Distant Def 3 that grants her a Def/Res bonus if attacked by a bow, dagger, tome, or staff. Her other skills are Blazing Light and Spur Def.

Boey is a green-tome magic user and also starts with a new weapon: Gronnowl+. The weapon boosts the user’s Atk/Spd/Def/Res based on the number of allied adjacent units. His new A passive skill, Earth Boost 3, gives him a Def bonus if he has more HP than his enemy. He also comes with Ignis and Renewal.

Mae is included as a blue-tome user to balance out the other magic users of this banner. She comes quipped with Blárowl+, the blue-tome version of Boey’s new weapon. She also has B Tome Exp 3 in her C slot that gives an experience boost to any blue-tome users on the team. Her remaining skills are Draw Back and Desperation.

Rounding out the team is Genny, a staff-user. She comes equipped with Gravity as her attacking skill, Physic as her healing skill, and Heavenly Light as her special. Her B skill is a new skill called Wrathful Staff 3 that removes the attacking penalties for staves.