Fjorm looks to be a very powerful new hero. You can take a look at a full breakdown of her skills and abilities below. She will be available in the new Legendary Hero summoning event that starts tomorrow! The end of the video also includes an interesting bit of text regarding Fjorm and future Legendary Hero events…

Fjorm: Princess of Ice will only be available to summon during Legendary Hero summoning events. The next time she is planned to be available is around the end of December.

So, it looks like we may get a new Legendary Hero summoning event around New Years! These will likely become recurring events. More heroes limited to these events will almost certainly arrive in the future. Regardless, you can look forward to another special summoning event in a little over a month.

Our first Legendary Hero summoning event starts in a little under 24 hours at 7:00am UTC on 28 November. It will end on 4 December at 6:59am UTC. In addition to Fjorm, the banner includes several more powerful 5★ heroes at a base summoning rate of 8%! These are the only 5★ heroes that will be available to summon in this banner. 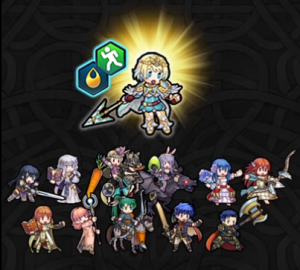 As a reminder, Heroes maintenance will be going into effect later today, in preparation for the upcoming Version 2.0 update. It will start at 11:00pm UTC tonight, in around 15.5 hours, and is scheduled to last around five hours. For a preview of all the cool stuff that will come out with the new update, check out our earlier article.