Four new Special Heroes are waltzing their way into Fire Emblem Heroes! The Festival in Hoshido Banner is now available, bringing four festival-themed 5★ alts: Micaiah, Ryoma, Elincia, and Xander. Check out our earlier article for their skills and details. 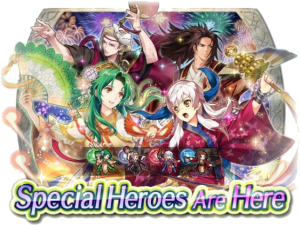 A new paralogue, also titled Festival in Hoshido, is also now available! Complete all three chapters on all difficulties for nine Orbs. You can also earn an additional three Orbs with special quests! You can see full quest details below. We’ll also get 13 more Orbs with the latest Log-In Bonus.

If that’s not enough Orbs for you, the August Special Orb Promo also starts today! This version of the promo contains 21 Orbs and also 60 Sacred Coins.

Additionally, Heroes released the next August & September Event Calendar a few hours ago! Check it out here: 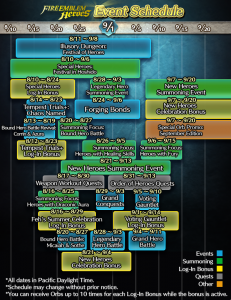 The next month in Heroes will be bringing quite a lot of new content! We have two batches of New Heroes coming up, one starting on 21 August and another on 7 September, and also the next Legendary Hero banner on the 28th.

Other events include the Feh’s Celebration Tempest Trials+, the second Forging Bonds, and the next iterations of many other Heroes events: New and Revival BHBs, Voting Gauntlet, Grand Conquests, and Tap Battle. We’ll also get new quests, other focus banners, and lots of goodies. A full chronological text breakdown can be found below.

As a reminder, Feh’s Summer Celebration is going strong! Today’s daily banner is Heroes with Death Blow, containing 5★ focus units for Effie, Hawkeye, and Klein. The next feature of the Celebration, a special edition of Tempest Trials+, will be starting early next week on 14 August. The final Log-In Bonus starts on the 16th.