Yesterday was quite a busy day for Three Houses news, thanks to a new Famitsu article. Today, two more gaming magazines–Nintendo Dream and Dengeki Nintendo–released their newest issues, with their own Three Houses articles.

Now, all of these magazines generally share the same content–and it’s usually Famitsu that gets the scoop first (for semi-obvious reasons). That said, they often use slightly different screenshots, since they don’t have space to publish all of them.

As it happens, Nintendo Dream features additional screenshots from the “War Phase”, 5 years later, showcasing a few more of the students. I’m aware that some people consider this a spoiler, so I’ve only shown the silhouettes. If you want to see the designs, click on the image or here (only if you are reading the full article)

If you compare with Lysithea in the “School Phase”, they have the same general build and similar hairstyle. The main thing that confused me was her hair colour, but I think she’s just standing in a really dark place. The back of her hair is white as you’d expect. Huh, 5 years later, it seems Lysithea hasn’t grown much, haha…

However, recently, a few more media outlets have posted their E3 previews of the game. Notably Polygon and Eurogamer Spain. It’s all stuff we’ve seen before in Gamespot’s preview and Treehouse Live, etc. but there are some interesting new discoveries to be found. If you’re interested, please continue on…

END_OF_DOCUMENT_TOKEN_TO_BE_REPLACED 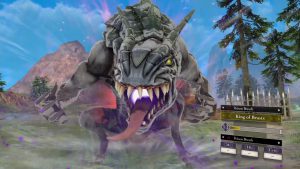 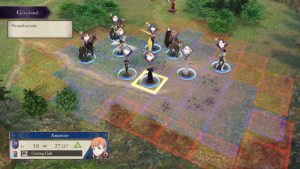 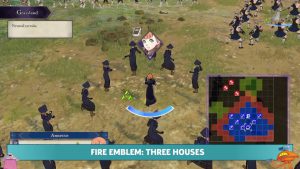 At the start, they play around with the map camera for a bit. It appears you can rotate the angle slightly, making the game almost isometric. There’s also the low angle camera, which makes all Battalions (the troops that follow units) visible–this was originally seen in the debut trailer. END_OF_DOCUMENT_TOKEN_TO_BE_REPLACED

Without further ado, here’s the second half of my analysis of Treehouse Live’s 30 minute gameplay session of Three Houses, which focuses on the battles. If you’re interested and you missed it, feel free to check out the first half that discusses the academy part. 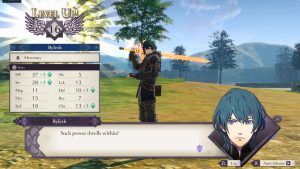 Prior to E3, we hadn’t really seen or heard much of the battles. Of course, we did learn how mechanics like Battalions and Gambits work, thanks to Famitsu. Still, it’s hard to get a feel for the gameplay without seeing it in motion. Gamespot also showed some footage earlier, but Treehouse Live was the first to fully showcase the battles.

This analysis is looking to be another really long one, so here’s the TL;DR for you. As some predicted, Combat Arts (battle-triggered skills that debuted in Echoes) consume additional weapon uses. You’ll have to choose whether to unleash a powerful move or conserve your durability for a rainy day.

The time-rewinding mechanic, which is based off Mila’s Turnwheel (also from Echoes), is officially known as Divine Pulse. Like the turnwheel, you can rewind individual actions or whole turns. The protagonist and some students have powerful weapons called “hero relics”, which can only be equipped with the associated crest.

That’s about it. Besides the flashy new features, the battles are Fire Emblem battles as you’ve always known them. Unlike previous console titles, namely the Tellius duology, movement is a lot faster. Also, you can skip animations like in the DS and 3DS titles. So basically there’s nothing to worry about.

With that said, please continue if you want to see everything dissected. END_OF_DOCUMENT_TOKEN_TO_BE_REPLACED

As promised yesterday, today’s Nintendo Treehouse Live started off with Three Houses. Overall, there was roughly 30 minutes of footage, covering the academy and battle parts. You might know I wrote a pretty big analysis for 8 mins of Gamespot’s video, which wasn’t even all gameplay. So, er, get ready for another mammoth analysis, I guess?

To save you some time, here are the big reveals. Firstly, when exploring the cathedral, dual audio was confirmed. So those who prefer Japanese voices can rejoice! Around the same time, we learned that some support conversations are only available post-timeskip–and you can romance characters during that time as well.

Also, it’s been confirmed that Raphael and Ignatz (previously translated as Ignace) from the Golden Deer can be recruited for use during the school phase even if you picked the Black Eagles. Previously, it seemed like they could only be used during the war phase, 5 years later.

Otherwise, keep reading for every detail, big or small!

Oh, actually, to make things hopefully easier, this analysis will be divided into two. To save my sanity and to give you some content to mull over while I finish the second half. 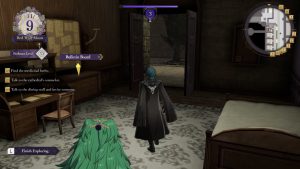 The footage begins with the male protagonist, Byleth, in his personal quarters. It’s currently the 11th month, the Red Wolf Moon, which is around halfway through the school phase. The player’s Professor Level (Instructor Level) is D, which is slightly lower than in the Gamespot preview. As such, only 3 action points are available.