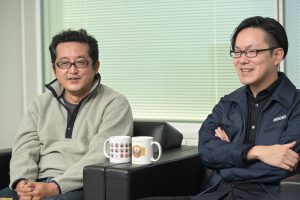 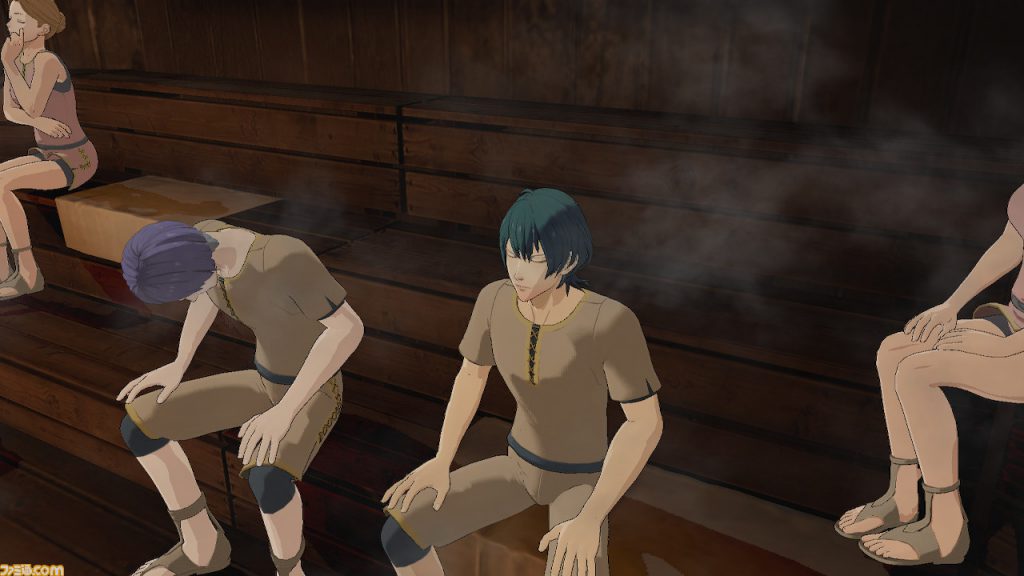 –This time, there were many additional contents distributed via the Expansion Pass, but were these contents decided at the beginning of development?

Kusakihara: Actually, the sauna activity was planned to be added in the main game, but we had to skip over it because we weren’t able to complete it to a satisfactory level.

–Could you expound on that?

Kusakihara: Well, when taking a bath, if the protagonist is female, you could only use the women’s baths and the reverse if they’re male. I think people would have been disappointed by this restriction.

Kusakihara: We also didn’t have any unclothed graphics to use and it was difficult to express what we wanted. With that kind of history, one day I suddenly thought “hey, wouldn’t it be fun to have them wear clothes in the sauna, while playing a mini-game?” and the idea kind of flowed from there.

Yokota: We came up with that idea just before release.

Kusakihara: In addition, we ended up adding activities to play with dogs and cats, due to a strong demand from Nintendo’s overseas office, who told us “we want this to be added”.

Yokota: Prior to that, I already spoke to Kusakihara-san about this idea. “I want a way for us to play with animals”.

Kusakihara: I remember. We gave up at first, but since they gave us a push, we decided to give it another try.

–When we first played the game, we were thinking “the monastery sure has a lot of animals”…

Kusakihara: Really? I don’t remember that…

Yokota: No, you definitely said it! After we placed all the cats, the dog fans within the staff came up to me and said “why are there no dogs!?”

Kusakihara: Is that so? By the way, there are 15 types of cats and 3 types of dogs.

Yokota: During the development process, Koei Tecmo Games came up with the names for the animal breeds, which was interesting. Before the version upgrade, only the rankings of the breeds was shown on the loading screens. 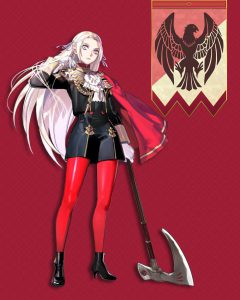 Kusakihara: The direction of each house was decided from the start. The Black Eagles had characters with more challenging backgrounds. The Blue Lions had more traditional characters, while the Golden Deer was full of misfits.

–It seems more people started with the Black Eagles.

Kusakihara: That makes sense. It was the only house with a female leader.

–On top of that, that route also had a hidden story branch.

Yokota: We kept it hidden, but the idea to have a story branch was there since the creation of the Black Eagle route.

–Did you have plans to implement a story branch for the other houses?

Yokota: No. We only decided it for the Black Eagle house and to keep it a secret. Edelgard is a character with a unique position, but we thought it would be more interesting to have two stories here, then we implemented the triggers for it.

–The four Ashen Wolves members living in Abyss are all characters who live beneath the surface.

Yokota: Kusakihara-san thought it would be better if they had an interesting background, since they are extra characters after all.

Kusakihara: Like the characters, the classes would be added shortly after launch, so we wanted them to cover multiple bases. There were many promoted classes in FE Awakening, so if we brought them back, we thought it might create some buzz. Also, fans wanted a Brawling class for females, so we created this lineup while considering the balance of classes and what was missing.

Yokota: Dark Flier is incredibly mobile and Constance can use Bolting (long-ranged magic), so you can overwhelm maps if you combine them well. Since Constance is an interesting character, we wanted her to really shine.

–As well as the Ashen Wolves, there are some characters from the main story who appear, but how did you choose them?

Yokota: Actually, I wanted to use the data from the main story, but because of the 5 year timeskip, it was difficult to balance the game around it. Due to these difficulties, we had the side story be a completely separate mode from the title screen. In this manner, we could create a story where all three house leaders would fight alongside you, which we think people would enjoy.

–Certainly, being able to fight together with the three house leaders is sure to impress players. It was difficult to recruit Hilda in the main story, so she was a nice choice too.

Yokota: Hilda will have her moments in the side story, so keep your eyes peeled. 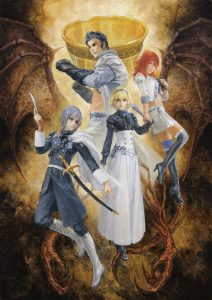 –The commemorative artwork for the side story has a really stunning style.

Yokota: When we were discussing the artwork that symbolised the side story, Kusakihara-san said to me “let’s try asking Jun Suemi.”

–What’s the story behind that?

Kusakihara: At first I had this amazing image in my head of Abyss, the setting of the side story, which is a vast space like an underground dungeon, and the students in white uniforms standing there like lights illuminating this dark space. As we dwelled on the idea, I remembered there was an illustration for a novel called “Parallel Universe Reizāsu” drawn by Jun Suemi, where a character was wearing a white suit. I’m just a fan, but at the same time, I thought it would be great if we could have Jun Suemi draw the artwork with the new characters. Especially for those in our generation, the art style really sticks out.

Kusakihara: If you think about it, oil painting can only be done when the paint is dry. “The temperature’s not warm enough, so the oil isn’t drying fast enough, but I’m doing my best”, I had comments like that, but since I’m used to digital drawings, it was a fresh experience.

Yokota: If an opportunity arises, I’d like fans to have a good look at the artwork, so they can appreciate the details.

–What sort of instructions did you give for the artwork?

Kusakihara: I requested for the four characters to really stand out.

–What about the wings in the background?

Yokota: Well, this is “FE” so… There has to be a dragon or something.

–What do you mean by that?

Kusakihara: You’ll have to play the game to find out the answer.

–That’s a meaningful answer (laugh). With the arrival of the side story, the game has become a talking point again and there will probably be people who discover this game because of it. Would you say the side story is a good starting place for new players?

Kusakihara: You could start from there, but you might be confused because the side story doesn’t have a tutorial for the core game mechanics. So we recommend playing a bit of the main story first, then go and play the side story.

Yokota: Because the story touches on a certain secret of the monastery, you’ll probably enjoy it more after playing through some of the main story.