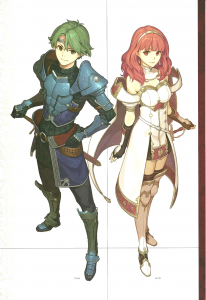 Since then, Kirokan and I have teamed up to translate new information from the book. You can follow our progress on the forums or Kirokan’s website.

Anyway, here is a recap of our progress so far.

First things first, Kirokan has kindly scanned all the official artwork and full body portraits from the book, including many previously unreleased ones.

END_OF_DOCUMENT_TOKEN_TO_BE_REPLACED 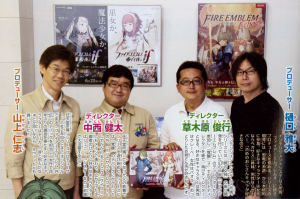 With so much going on in the Fire Emblem world lately, it’s too easy for things to be forgotten and left behind. Such as this interview with the Awakening development team from way back in 2013. 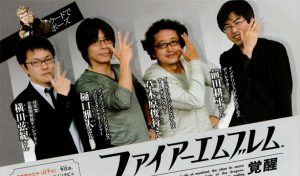 Conducted by Nintendo Dream to commemorate the game’s 1st anniversary in Japan, this interview was one of the first to touch on how Awakening helped to save the series from dire straits.

Yes, we can rest easy now, but, during development, we were faced with a rather grim situation: “If this game doesn’t sell well, the FE series is probably over.”

There’s also a lot of insight into how the game’s DLC was developed, including some amusing commentary about the controversial censored swimsuit Tharja CG in the North American version.

But it actually had to do with the rating systems. So in North America, they chose to hide part of Tharja’s swimsuit.

But in their efforts to conceal it, we heard it ended up being taken as even more suggestive…

You can find the full translated interview over on Kantopia or on our forums.

Fire Emblem Echoes: Shadows of Valentia has been out for a week in Japan now. Starting today, players can download “Gift from the Goddess 2”, which grants a rare Villager’s Fork item, but only once per save. 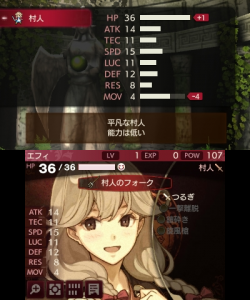 When equipped with this item (which cannot be found in-game), any character who isn’t Alm or Celica can Class Change to a Villager at a Mila Shrine, allowing them to explore other class paths and gain more Levels.

In related news, Kirokan has kindly translated a rather lengthy interview with the Echoes development staff from the June 2016 issue of Dengeki, which came out recently. You can read it on Kirokan’s website, or over on our forums.

You may have already seen an out-of-context quote from this interview posted on various gaming sites; if so, we definitely recommend reading the entire interview (or at least the relevant parts) to see what the developers really meant.

Besides that, the interview provides a lot of insight not just for Echoes, but for the well-being and future of the series. There’s even a sneaky mention of the abandoned real-time Fire Emblem game.

A special thanks to Kirie for sharing the interview!