On May 22nd, the Cipher Team held the Cipher Spring Livestream on NicoNico. The broadcast featured news about the upcoming Cipher Caravan events, lots of new cards and artwork for the upcoming Series 5 and 6, and also a formal announcement of the games for Series 7 this winter. 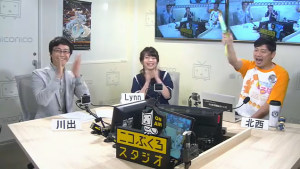 Ryota Kawade and Tsutomu Kitanishi are once again joined by Lynn, Azura’s voice actress. After introductions and some chatting, they started off the presentation by talking about the upcoming Cipher Caravan events that will be held around Japan from late-June through mid-August. 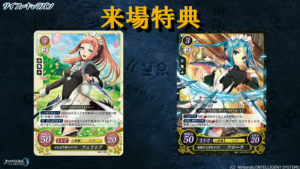 New promo cards of Felicia and Flora will be available at the events, as well as an abundance of merchandise, some new, some old.

The new merchandise includes (pictured from left to right, top to bottom): New can badges for Binding Blade characters, a Cipher-themed card binder, an artbook for Series 4, a Lord sprite tote bag, a Lord sprite ballpoint pen, a playmat featuring Leo and Takumi from Fire Emblem Fates, and another playmat with the new lord sprites. 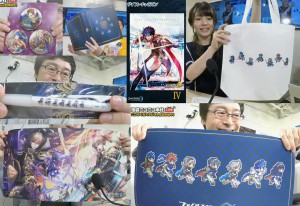 After showing off the new Caravan merchandise, our hosts moved on to discussing the newly upcoming Series 5, which will be released in about a month. Kawade showed off a copy of the Elibe ST Deck, then went into a bit of discussion about the world of Binding Blade, showing off a cute map with some of the region’s featured characters.

Some new cards from the upcoming set were also unveiled, including images of both promoted and unpromoted Roy and Lilina, as well as cards for Shanna, Thite, Elen, Wolt, Lugh, and Sue. We know from the weekly releases that the promoted Roy card is exclusive to the ST Deck, so it’s like that this promoted Lilina is as well. 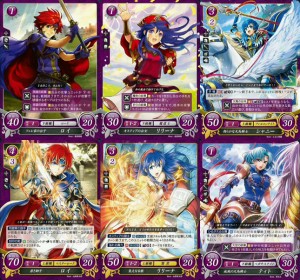 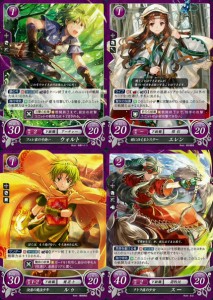 Next they showed off Dieck’s R and R+ cards, showcasing the alternate artwork for his R+ card. As announced in the previous livestream, from now on all + versions of R and SR cards will have alternate artwork like these shown. Collectors will now have even more awesome artwork to collect!

The Radiant Dawn portion of the show started off with another map featuring more cute chibi drawings of some of the main players in Tellius. 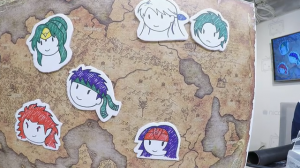 The hosts then proceeded to show off some new Radiant Dawn cards of Micaiah, Sothe, Bastian, Nephenee, Sigrun, Soren, Muarim, and Vika. 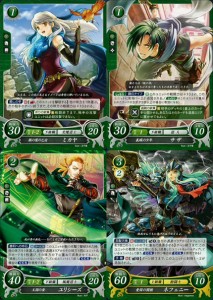 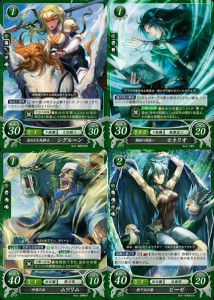 Like Dieck, we also got to see both the SR and ST+ versions of Sanaki, as well as a shot of Sanaki’s unpromoted card.

In the next segment of the broadcast, we were able to see some artwork for Series 6, which will feature characters from both Genealogy of the Holy War and Fates. It was also discussed during this time that the Fates focus for this set will specifically be Revelation and Conquest, so it’s possible that there will only be Black cards for the Fates characters. 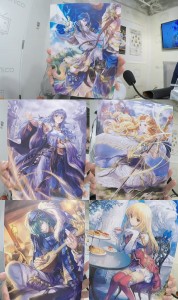 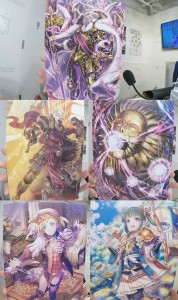 The most exciting reveal of the livestream was, of course, saved for last: the official announcement for Series 7! The featured games for the newest series will be Blazing Sword and Fire Emblem Fates. The Fates character focus for this set will be Revelation and Birthright, so it may only contain White cards, as a counterpoint to the S6 Black cards. 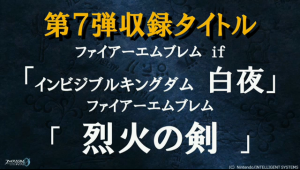 They also had a few pieces of artwork to show off for this new series, including dual artwork of Xander and Ryoma and shots of both Nino and Eliwood from Blazing Sword. 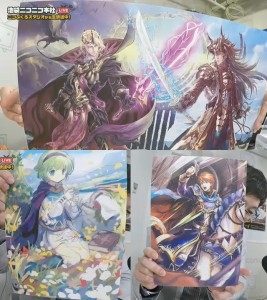 The next livestream event will be held on June 18th, the Saturday before Series 5’s official release date. Like other pre-release livestreams, it will focus on opening up booster packs of the new series to show off new cards, especially signed cards. Look forward to it!