The Japanese banner can be viewed here.

Included in the batch are units of each color, and a Spark system, to ensure that after 40 summons, you as a Summoner can pick a free 5* Hero for yourself from the batch of 4.

There aren’t that many new skills, but we have the next Rouse-# skill (Rouse Atk/Spd 3), but more interestingly, a new movement assist skill, in Rescue+ (found on Flayn), which is sure to make things interesting going forward. It is a staff assist skill and reads as though it behaves like a combo Draw Back & Restore+. Would a future skill like Warp be a new staff support that behaves like Smite & Restore+ I wonder?

Additionally, Nemesis has been announced as the next Grand Hero Battle. His GHB will debut also on the 20th.

Included in the trailer appears to be Kiran, but on the battlefield and wielding the Folkvangr sword. If you’ve been paying attention to the plot, you might have a hunch as to what’s going on.

Finally, the Meet the Heroes pages for all five aforementioned characters have been updated, so go collect your cute little character art.

For details and artwork on the units, click Read More.

END_OF_DOCUMENT_TOKEN_TO_BE_REPLACED

An unlikely winner of Choose Your Legends 4 has arrived in Grand Hero Battles. Between 19th and 27th August 2020, Summoners can challenge Jorge: Traveling Peddler.

If you’ve never heard of our friend Jorge, we don’t blame you. Along with his twin brother Daniel (who makes a cameo in Jorge’s special art), he’s an incredibly minor shopkeeper from the Tellius games.

Still, if Jorge can make his way into Heroes, you have to wonder who else can…

Joining the recently added Heroes in Heroes, Light and Shadow is Eremiya: Bishop of Woe, who can now be challenged in Grand Hero Battles until the daily rollover on 3rd August 2020 (UTC).

For those not familiar, Eremiya is the leader of a group of assassins from New Mystery of the Emblem, serving under Gharnef. She’s probably the last notable villain to be added from the Archanea arc, besides Medeus, the Shadow Dragon.

If you want to know her better, check out her Meet the Heroes page (there are spoilers, but that’s nothing new). Oddly, her images are labelled as “Jeremiah: Hollow Bishop” (Eremiah was her name in the fan translation for a spell). It’s probably just a placeholder though.

Anyway, please keep reading if you want to know her abilities and whatnot.

END_OF_DOCUMENT_TOKEN_TO_BE_REPLACED

Just a few notices for Fire Emblem Heroes players on this weekend. In case you missed it, Ashnard: Mad King can be challenged in Grand Hero Battles until the daily rollover on 16th May 2020 (UTC). 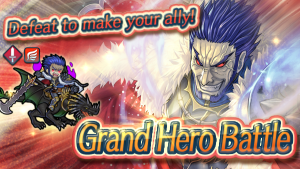 After the tragedy of the Gungnir, it’s nice that Ashnard is a very capable Hero. Here are his skill available as a 5-star unit:

Meanwhile, starting today and until 25th May 2020 (UTC), Feh Pass subscribers will receive a 5-star Hector: General of Ostia, plus a resplendent skin for all instances of that Hero.

Afterwards, Sanaki: Begnion’s Apostle will be the next Resplendent Hero to be distributed.