Not long after opening pre-orders for the Japanese “Valentia Complete” edition of Fire Emblem Echoes, Nintendo posted an article discussing this luxurious product. 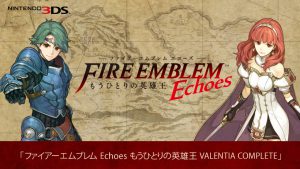 The biggest highlight of the article is the chance to sample four tracks from the “Sound Selection Echoes” soundtrack CD, which is included in both the Valentia Complete and the Limited Edition.

The samples feature the original music from Gaiden (the game that Echoes is based on) alongside the newly arranged versions from Echoes.

END_OF_DOCUMENT_TOKEN_TO_BE_REPLACED 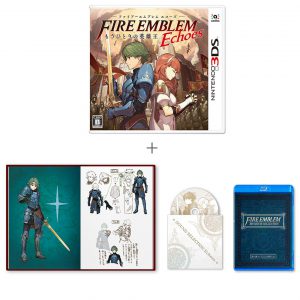 END_OF_DOCUMENT_TOKEN_TO_BE_REPLACED

It’s only been a day, but we have some more minor updates that we’d like to bring to your attention.

For those wishing to pre-order the the Japanese Fire Emblem Echoes Valentia Complete edition from the My Nintendo Store on 27th February 2017, there has been a change in plans.

Due to the “unexpected” amount of traffic during the launch of the My Nintendo Store, which resulted in the website crashing to a halt, Nintendo has promised to make amends, starting with the upcoming Valentia Complete.

Initially meant to be a “limited quantity” item, the Valentia Complete will now be available to everyone who pre-orders during the specified period. However, to accommodate this change, the starting date for pre-orders has been delayed until further notice.

Note: The final release date for the product has not changed.

END_OF_DOCUMENT_TOKEN_TO_BE_REPLACED

It’s almost been a whole week since the epic Fire Emblem Direct and we have a few minor updates and reminders for you.

Firstly, as we mentioned at the end of our trailer analysis for Fire Emblem Echoes, it was announced that Japan would be getting two special editions.

The second and larger of of these–the luxurious Valentia Complete will only be available from the recently opened My Nintendo Store. More precisely, pre-orders will open on 27th January 2017.