Nintendo to discontinue 3DS/Wii U eShop support in March 2023, and how this affects Fire Emblem

Today Nintendo announced that eShop support for Wii U and 3DS platforms will be discontinued as of March 2023. This will have a ripple effect throughout all Nintendo properties, but for Fire Emblem it will have several unfortunate consequences.

As for everything specifically that will be lost to time, read below:

END_OF_DOCUMENT_TOKEN_TO_BE_REPLACED

Following yesterday’s DLC details for the Japanese version of Fire Emblem Echoes: Shadows of Valentia, the updated English official website has delivered plans for DLC in the West.

First, let’s start with the good news. After the disappointing way that Fates’s DLC “ended”, it appears we’ll be receiving all 22 DLC that Japan is getting. This even extends to the Cipher collaboration DLC, which is very surprising.

(While the North American website hasn’t revealed that the Cipher DLC is coming, the UK/European website is a lot more open about it.)

Fortunately, there will be weekly free DLC in the form of “Mila’s Bounty”, which provide access to rare and exclusive items.

Anyway, we already covered the DLC in depth not long ago, but if you’re interested to see how it compares to the Japanese DLC, carry on reading!

END_OF_DOCUMENT_TOKEN_TO_BE_REPLACED

Today, the Japanese official website for Fire Emblem Echoes: Shadows of Valentia updated with new information about the tentative Series 2 and 3 DLC. 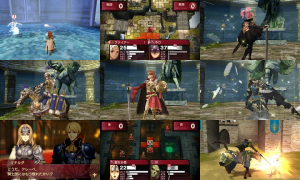 As it happens, Series 2–dubbed “Heroes’ Challenge”–is available to purchase now. Whereas Series 1 was geared towards early-game, the maps in this series will benefit those who’ve reached mid-game or beyond.

Additionally, all players can download the 3rd piece of free DLC–“Goddess’s Gift 3”, which grants a rare Taurus shard and 5 shiny Golden Marks.

Series 3 will arrive a bit later, starting from 24th May 2017. This series is divided into the “Sealed Altar”, which contains 10 new ultimate classes, and the “Prelude of the Deliverance”, four story maps that occur before Alm’s journey starts.

Everything we currently know can be found in our DLC section. Or if you’d like, keep reading for the full lowdown!