Summoners; with the Winter season nearly over, it’s Spring that now resides on our doorsteps, and Fire Emblem Heroes knows this, by welcoming the Spring season with the upcoming Willful Rabbits banner. This time around, we have four (plus one) alts aboard, and a Tempest Trials+ unit that’s a first-timer to the fray, giving us some love for Awakening and Sacred Stones series of Fire Emblem.

Say hello to Severa, Inigo, Minerva, and Harmonic-Hero Myrrh (plus Nah), and a special hello to the reward unit, Saleh: Vernal Sage, on March 17. Additionally, look forward to getting your hands on Minerva, as she’s the 4* Focus hero in this banner. Those aren’t the only surprises this time around though, as we also get access to the first Duel skill for Cavalry units, in R Duel Cavalry 4. There are many other powerful inheritable skills this time, as well as two Rein skills, another Duel 4 skill, and two unique inheritable weapons that boost Atk and Spd of the user and negate penalties too.

Again, this banner will drop on March 17, and run for one month. The Tempest Trial+ event kicks off on March 18

END_OF_DOCUMENT_TOKEN_TO_BE_REPLACED 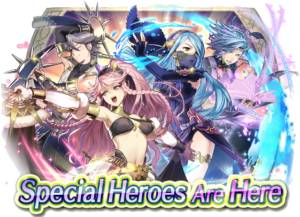 The featured Heroes are dancer versions of Olivia, Inigo, Azura and Shigure. For more details (such as Skills), please refer to last year’s article.

Although it may have been the perfect time to repeat this event while Festival in Hoshido was ongoing, the original event debuted during late September last year so it seems they wanted to wait until it was nearly a year.