Heroes: Even Dragons Celebrate the Fall in “Dragons Harvest”

We’re approaching the Halloween season, which means more spooky Special Heroes coming to Fire Emblem Heroes! This time, all the Heroes have one thing in common: dragons.

The Special Heroes introduced in “Dragons Harvest” (which runs from 8th October UTC) include Halloween versions of Robin (as Grima), Xane, Dheginsea and Harmonic Tiki and Ninian. Xane will also appear as a 4★ focus Hero.

There’s a saying around here that “Goldoa will not move”. Unless the order of the world has been threatened. Or when there are sweets at stake. Besides the Black Dragon King, this is Xane’s debut in Heroes–and it’s interesting to see how his mimicking ability has been translated.

Additionally, Ena: Autumn Tactician will be available in the “Ever Two Halves” Tempest Trials event that starts on 9th October (UTC). Other rewards from the Tempest Trials include the Brazen Def/Res 1 and Atk/Def Solo 1 Sacred Seals.

The bonus Heroes for this event are the four new Special Heroes, Ena herself, plus the regular versions of Young Tiki, Ninian and male Robin. You can attempt to summon the latter three from the Tempest Trials banner, which is available now.

Please continue reading to learn about the new Heroes!

END_OF_DOCUMENT_TOKEN_TO_BE_REPLACED

From today, Tiki, the princess of the Divine Dragons, is joining Fire Emblem Heroes as the 11th Legendary Hero. 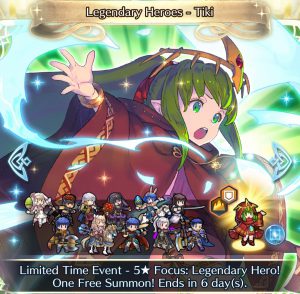 Summoners can attempt to summon Legendary Tiki from this month’s Legendary Hero banner, which also features a variety of rare Heroes, including a few of 2018’s spring and bridal Heroes.

In addition, Tiki will be showing off her incredible powers in a series of Legendary Hero Battles. Completion of all maps will award an Earth Blessing, 9 Orbs and–if you can conquer Abyssal–a Golden Askran Hairpin.

Joining her are Legendary Hector and Robin in repeats of their original Legendary Hero Battles. This time, you can challenge Hector on a new Abyssal map to earn a Golden Enigmatic Mask. Meanwhile, Abyssal Robin is available once again.

Robin will come with two maps, running on Normal at level 25 and Hard on level 35, unlocking a 2* and 3* version of her.

Her specialty weapon is Gronnwolf, a green tome that deals effective damage against Cavalry units, as well as possessing some neat skills for her niche. If you’re in the middle of your game, you may need to exit the game and re-enter it to initiate the download process. 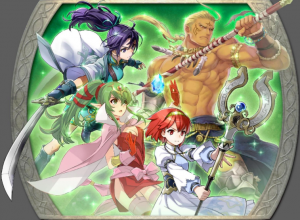 In addition, a new Focus, Battling Robin has emerged, running alongside last week’s Family Bond. This focus features Fir, Tiki (Awakening), Hawkeye and Maria, netting us no new blue units but the possibility of some pretty powerful units.These of course, are available at a 3% initial appearance rate within their Focus.

Eirika, Ephraim, Julia and Seliph are not available in this focus, but still exist in their Family Bond focus. Both run until February 27.